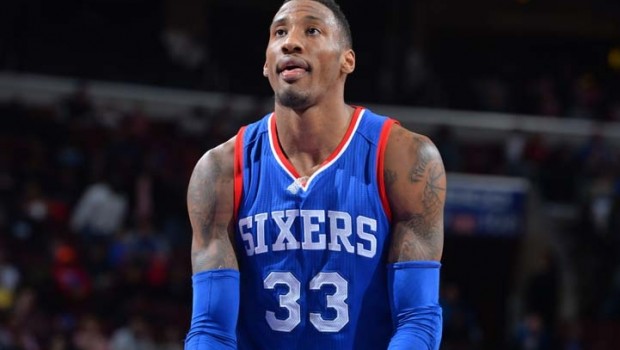 You can tell the Sixers are playing with a lot more confidence than they did earlier this season when a 10-day contract player, Tim Frazier, replaces their biggest star and he gets 11 assists Friday night and eight Saturday night in a victory at the Wells.

Robert Covington (photo above) scored 11 of his game-high 22 points in a pivotal third quarter, leading the Sixers to an 89-81 victory over the Charlotte Hornets on Saturday night.

It Philly’s fourth straight home victory after opening the season 3-18 on its home floor. The last time the 76ers won a fourth in a row at home was on March 30, 2013, when they defeated the then Charlotte Bobcats.

Al Jefferson had 18 points and Gerald Henderson 17 for Charlotte, which lost for just the fourth time in 16 games.

Michael Kidd-Gilchrist did not return after leaving with a right hamstring strain with 5:24 left in the first half. Michael Carter-Williams missed his second straight game with a right toe injury, and Philadelphia earned its first win in 11 games without its starting point guard in the lineup. Carter-Williams’ injury pressed Frazier (left) into the starting lineup. Frazier, signed to a 10-day contract on Thursday, had 11 assists in his NBA debut in Philly’s 107-96 loss at Boston on Friday.

After a slow start, Frazier finished with eight assists while going scoreless.

The Sixers pulled ahead with a big third quarter, outscoring the Hornets by 15 points to take a 70-61 lead. Charlotte went just 3 for 17 from the field in the period.

The 76ers, who trailed by as many as 16 points in the first half, took their first lead since early in the game on Luc Mbah a Moute’s layup that made it 53-52 with 6 ½ minutes left in the third. And then Philadelphia got hot, scoring 14 of the next 19 points, capped by Jerami Grant’s layup with 2:01 left in the period, to take their largest lead at 70-57. The Hornets scored the last four points of the quarter to enter the final period down nine.

Charlotte never got closer than five in the final quarter.

Covington finished 7 for 15 from the field, including 5 for 10 from 3-point range.