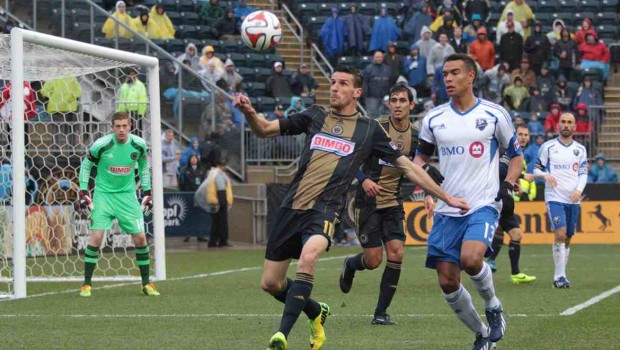 The 2-1 Union gave their home opener packed crowd something to cheer about yesterday:

A 3-0 victory over the New England Revolution, 3-0, in front of a crowd of 17,027 who braved the nasty weather at Talen Energy Stadium.

Sebastian Le Toux (above) scored in the second half in stoppage time. Leo Fernandes and Chris Pontius earned the assists on the goal.

Revolution defender Je-Vaughn Watson left the game in the 36th minute on a red-card foul against Roland Alberg.

After a week off, the Union travel to play Chicago Fire on April 2.

The next home game for the Union is on Friday, April 8, when they host Orlando City Soccer Club at 7 p.m. F