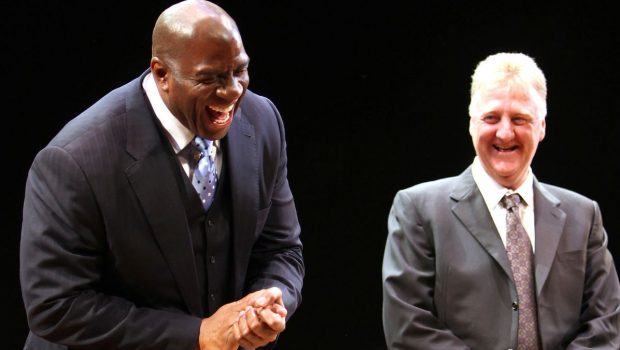 40 YEARS AGO THIS WEEK: MAGIC AND BIRD CREATED THE MADNESS!

Magic Johnson and the Michigan State Spartans defeated Bird and the Indiana State Sycamores in the 1979 NCAA Championship game by a final margin of 75‐64, kicking off a rivalry between the two players which would extend into the NBA.

Johnson was spectacular scoring 24 points with seven rebounds and five assists while shooting .533 from the field and .800 from the line across 35 minutes of play. Bird was no slouch himself with 19 points, 13 rebounds, two assists, five steals and a blocked shot while playing the entire 40 minutes of the contest.

Hyped as a matchup between city vs. country, black vs. white, style vs. substance, the game made Magic and Bird icons and drew a 24.1 Nielsen rating, a mark that still stands as a broadcast record for a college basketball game.

Even though it was the last either would play in college, the game also put the NCAA on the map on a national level and allowed the tournament to expand from 40 teams in 1979 to 48 in 1980 and then 64 teams five years later. TV rights fees of $5.2 million in 1979 also nearly doubled the next year season as well.

“The college game was already on the launching pad, and then Bird and Magic came along and pushed the button,” is how the late coach and commentator Al McGuire put it in When March Went Mad: The Game That Transformed Basketball.

Luckily for the struggling NBA, Johnson and Bird would move on to launch the pro game to new heights as well in the 1980s as their rivalry transitioned nearly seamlessly to the pros.

In the NBA, Bird swapped his blue Sycamores jersey for Celtic green and Magic traded his Spartan green and white in for Laker yellow and purple. With those two stars on their respective rosters, either the Celtics or Lakers would go on to play for the NBA title in every year of the 1980s.

In three of those years (1984, 1985 and 1987), the two teams played each other with the Celtics and Bird winning the first matchup and the Lakers and Magic winning the final two.