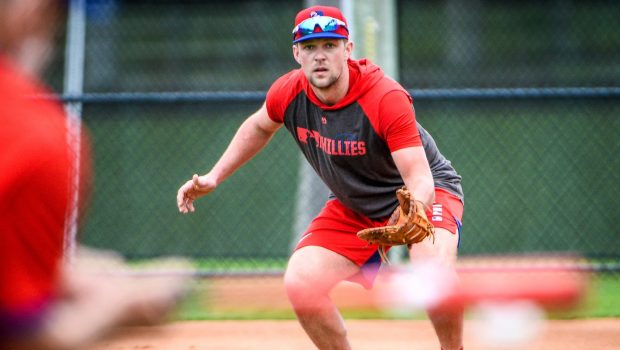 The last Phils fans saw of Rhys Hoskins was last October, when he finally gave in and had Tommy John surgery to repair a torn ligament in his left elbow.

The original timetable had him returning anywhere between early February to early April.

But after receiving medical clearance this week — he passed a final defensive test, which had him diving for baseballs — Hoskins said he expects to be in the Phillies’ Opening Day lineup on April 1 against Atlanta.

And yesterday in Clearwater he launched a few home runs during a couple rounds of batting practice during the Phillies’ first full-squad workout.

“I let it fly a little bit,” Hoskins said afterward. “Just to kind of make sure that it’s still in there. It’s always nice to remind yourself, especially in batting practice. Yeah, it felt pretty good today.There’s no reason why I shouldn’t be,” Hoskins said, referring to being ready for opening day.

“But we’re going to use these next four or five days before games start to try to get the rep count up, get it a little bit more normalized, and as long as I can get the amount of at-bats that I’m used to in Spring Training, which should be no problem, I don’t think Opening Day is out of the picture.”