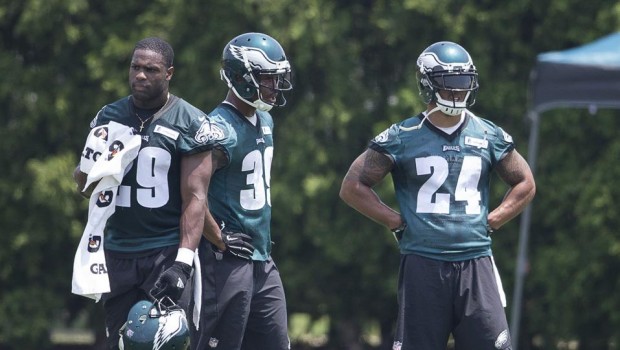 4 EAGLES NEWBIES WHO WILL WREAK HAVOC IN THE NFC EAST

Eagles training camp is still three weeks away, but the natives in Eagles Nation are getting restless to find out just how Chip Kelly’s new Birds will do in the NFC Least.

Here are four reasons the Cowboys, Giants and Redskins should be worried:

WR Nelson Agholor: Given the 67 catches, 872 yards and eight touchdowns the Birds got from second-round rookie Jordan Matthews last season, expectations are high for the 20th pick in this season’s draft. Matthews played with Nick Foles and Mark Sanchez splitting the starts; if Sam Bradford is an upgrade at quarterback, those numbers seem possible for Agholor. The 6-foot-1, 198-pound rookie has the size and speed of the man he’s ostensibly replacing, Jeremy Maclin, and throws in return skills to boot.

QB Sam Bradford: Would anyone be surprised if Bradford, the No. 1 overall pick in 2010, flamed out terribly? Would anyone be surprised if he puts up career numbers under Chip Kelly? This move is so intriguing because the potential outcomes run the gamut. Bradford is recovering from consecutive seasons ended by knee ligament tears, yet in Philly would be working with more offensive talent than he did at any time in St. Louis. Bradford’s record as a Ram was 18-30-1, but he threw 59 touchdown passes to 38 interceptions, and averaged 225 passing yards per game.

RB Ryan Mathews: Speaking of physical backs, the 6-foot, 220-pound former San Diego Charger is a curiosity because he’s unlikely to get the majority of the carries for the Birds. But, that also lessens the concern about his biggest negative, injury. Mathews played in 60 of a possible 80 games in five seasons with San Diego, with only one 16-game season to his credit. However, he’s surpassed 1,000 yards twice, and is the decisive type of back that Kelly likes. Splitting carries with Murray and Darren Sproles might render him more effective, and both he and Murray are insurance policies against one another’s injury histories.

RB DeMarco Murray: Last season in Dallas, his fourth in the league and the first in which he played 16 games, Murray gained 2,261 yards from scrimmage. He led the NFL in rushing, gained 4.7 yards per carry and added 57 receptions. But those touches — the catches, the 392 rushes, plus 48 more touches in two playoff games — add up. Plus, conventional wisdom gives credit to Dallas’s excellent offensive line for much of Murray’s success. But Philly’s line isn’t shabby, although it let guards Evan Mathis and Todd Herremans leave. And Murray, who missed 11 games his first three seasons, should split carries, meaning he shouldn’t have to take the pounding he did last season. It’s a risky proposition to go from LeSean McCoy to new backs in the backfield, but Murray, 27, could be in his prime.