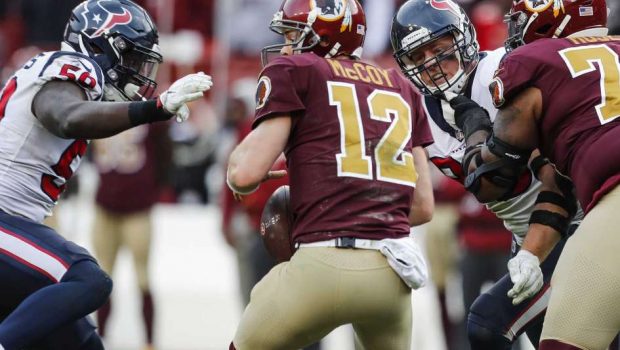 4-6 EAGLES STILL HAVE A CHANCE IN THE WORSE-THAN-EVER NFC EAST!

Redskins Coach Jay Gruden emerged from the back of the team’s locker room and began walking down a FedEx Field corridor.

Outside, the scoreboard said his team had lost, 23-21, to the Houston Texans. Inside the room behind him, doctors had told him his quarterback, Alex Smith, had fractured the tibia and fibula in his lower right leg and would be headed to immediate surgery.

As Gruden walked, his eyes stared at nothing in front of him. He let out a deep breath. Smith had gone down midway through the third quarter on a sack from Houston’s Kareem Jackson, his leg breaking in such a grotesque manner that it provided an eerie reminder of another Redskins quarterback, Joe Theismann, 33 years to the day since his own gruesome leg injury. Anyone who watched Gruden making this postgame walk had to wonder whether the season was crumbling before him.

“To Dallas,” he said when asked where his mind turns now.

Yesterday’s loss to Houston left Washington 6-4, and its starting quarterback is lost for the season. The combination makes Thursday’s Thanksgiving game against the Dallas Cowboys perhaps its most important of the season as the Redskins cling precariously to a one-game lead in the NFC East over the Cowboys, the team’s biggest rival.