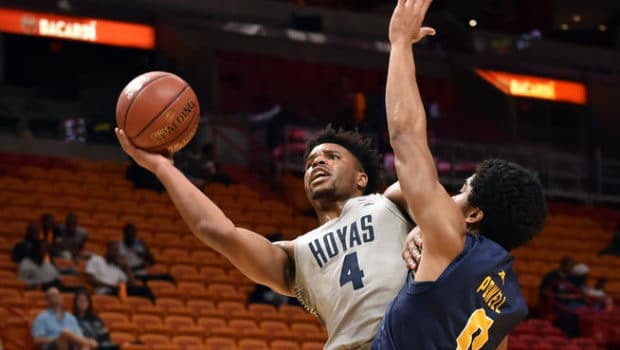 Jessie Govan scored 19 points and Jagan Mosely had 14 for the Hoyas (6-4), who won their fourth straight. Georgetown shot 53 percent for the game and 58 percent from 3-point range.

Jordan Price scored 23 points for La Salle (4-4), which got 19 more from B.J. Johnson and 10 from Pookie Powell. The Explorers were outscored 36-22 from the line, getting there 10 fewer times than Georgetown.

It was a homecoming for Hoyas reserve center Trey Mourning, whose father Alonzo Mourning is one of two players – soon to be three, when Shaquille O’Neal gets added to the list this month – to have his number retired by the Miami Heat.

The younger Mourning wears No. 33, just like his dad did at Georgetown and for the Heat, and used to work at the arena as a Heat ballboy. He got into the game for the final 23.2 seconds, as the Hoyas ran out the clock.