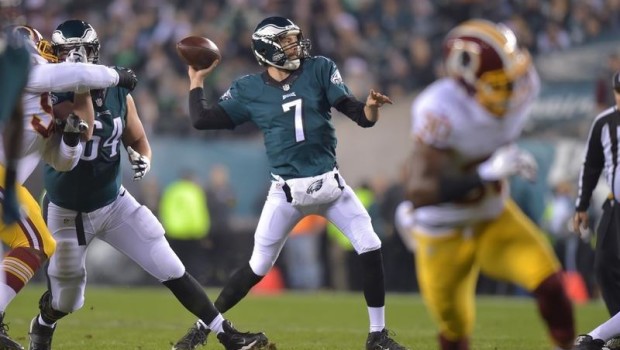 EAGLES’ BRADFORD MORE THAN HELD UP HIS END OF THE BARGAIN!

Bradford stood tall last night: 37-for-56 for 380 yards and a TD — and at least five drops, including one that would have been another score!

Quarterback Sam Bradford said all the right things after last night’s playoff-eliminating loss to the Redskins.

Bradford has decided he wants to stay with the Eagles.

After Saturday night’s 38-24 loss to the NFC champion Washington Redskins eliminated the Eagles (6-9) from the postseason, Bradford — staring at free agency — declared his love for the City of Brotherly Love and coach Chip Kelly’s offense.

“And I would really like to play in the same one for a second year.”

So, with Kelly — who is also the general manager — already saying he wants Bradford back, all that’s left is for both sides to settle on the length of the contract and the price — unless, of course, some pesky agent gets in the way.

“I want to be back here,” Bradford said. “We’re not at the stage where we have been talking about that, but if it does present itself with the opportunity, this is where I want to be. We haven’t engaged in any talks about future contracts.”

Bradford likely will want more than just money. If he’s smart, he’ll insist on a game-breaking talent at wide receiver — in a division that already is home to Dez Bryant of the Cowboys, DeSean Jackson of the Redskins and Odell Beckham Jr. of the Giants.

On Saturday night, Bradford was 37-for-56 for 380 yards, a touchdown and no interceptions, and it could’ve been — should’ve been — more:

His fault: Bradford overthrew wide-open Zach Ertz on what would’ve been a sure TD in the first quarter.

Not his fault: Wide receiver Nelson Agholor dropped a back-shoulder pass in the end zone, wide receiver Riley Cooper inexplicably lost a completion when he failed to control the ball as he fell to the ground in the middle of the field, and Ertz dropped two passes and fumbled away a completion.

And then there was running back DeMarco Murray’s fumble that was returned for a crushing TD in the third quarter.

Bradford’s reaction to the dropsy epidemic: “I’m still going to throw to those guys, because I have confidence in them. They’ve shown they can make plays.”

Actually, he’s still going to throw to them — at least in next week’s meaningless game against the Giants — because, well, they’re all he’s got right now.

“It’s just a matter of execution,” Bradford said. “We continue to shoot ourselves in the foot. The same things we were doing in Week 1 and Week 2, we continue to do. Good teams don’t make the mistakes that we make on a week-to-week basis.”

Bradford might demand a better offensive line, too. He was sacked five times Saturday night, and avoided a sixth sack with intentional grounding.

And how does he grade himself?

“I do feel like I’ve improved as the year has gone on,” he said.