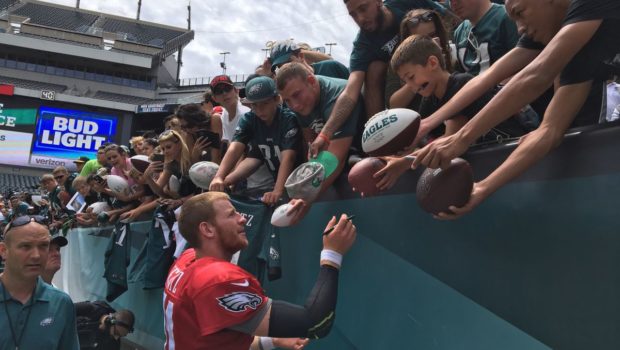 Eagles Nation is in love with this year’s Birds.

More than 36,000 fans showed up yesterday at the Linc for a free open practice, which brings the total of two open sessions to 60,000!

There was a sea of No. 11 jerseys in the crowd, as well as signs to grab the QB’s attention. One just over the player tunnel read: “We flew 1,700+ miles to see Wentz”. Another said, “Fan from Wyoming.”

The best example of how Wentz performed came during team drills, when he managed to zip a seam pass through three defenders and into the arms of tight end Trey Burton for a big gain. It was that type of day, where just about everything Wentz threw was accurate and on-time.

The improvement in Wentz is noticeable compared with this time last year. The ball isn’t sailing on him like it was during his first pro camp, and his delivery looks to be tightened up. We’ll see how it all translates when the lights come on in September.

After Sunday’s session, Wentz once again received a rock-star welcome as he mingled with the crowd.