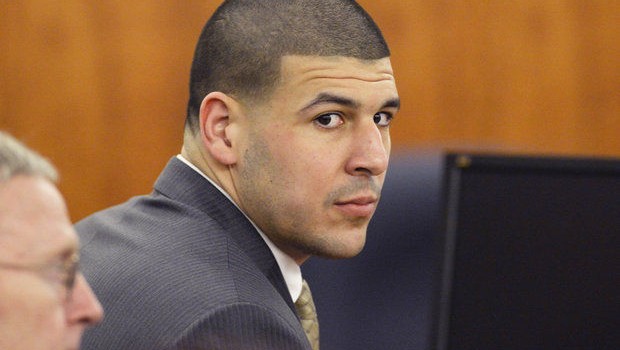 After only 35 hours of jury deliberation, former Patriots tight end Aaron Hernandez was found guilty Wednesday of first-degree murder and faces life in prison without the possiblity of parole.

Here are key dates in the case:

— June 8, 2010: Hernandez, a standout tight end drafted from the University of Florida, signs a four-year contract with the New England Patriots.

— July 16, 2012: Two men, Daniel de Abreu and Safiro Furtado, are shot to death in their car as they wait at a red light in Boston’s South End neighborhood.

— February 2013: An associate, Alexander Bradley, is shot in the face in Florida. Bradley files a lawsuit alleging that Hernandez shot him after they argued at a strip club.

— June 17, 2013: The body of Odin Lloyd, a semi-professional football player who was dating the sister of Hernandez’s fiancee, is found about a mile from Hernandez’s mansion in North Attleborough, Massachusetts.

— June 26, 2013: Hernandez is arrested on a murder charge in Lloyd’s slaying and taken from his home in handcuffs. He later pleads not guilty. The Patriots release him hours after his arrest.

— May 15, 2014: Hernandez is indicted on two counts of first-degree murder and other charges in connection with the shootings of de Abreu and Furtado. His lawyers say he is innocent.

— May 28, 2014: Hernandez pleads not guilty to seven charges in connection with the deaths of de Abreu and Furtado. A prosecutor says Hernandez was angry because de Abreu accidentally bumped into him at a nightclub while dancing, spilling his drink.

— April 7, 2015: Prosecutors and Hernandez’s lawyers present their closing statements and the case goes to the jury.