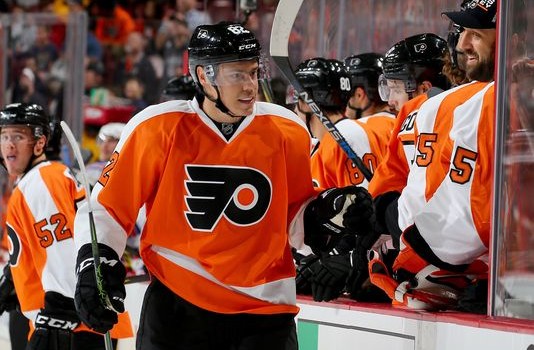 Flyers defenseman Evgeny Medvedev has had a fairly good start in this young 2015-16 season:

He has one assist and is averaging 17:46 of ice time per game in five games. He is the Flyers’ third-best possession player, with a 53.24 shot-attempts percentage and a plus-9 shot-attempts differential.

But a bigger challenge has been learning English, for which he took daily lessons during training camp but has cut back on them since the regular season started. His teammates have helped fill in some blanks. Sort of.

“Right from the start he’s played well,” defenseman Nick Schultz said. “He had a great [training] camp, played well in [preseason]. Probably as it goes along, he’ll get more and more comfortable. The language barrier has come along. Just sitting by him a little bit, it’s tough, but he’s understanding more. He can speak a little more. He’s trying with that, so that’ll help too.”

Medvedev, 33, had spent his entire career in Russia, including the past eight seasons with Ak Bars Kazan in the Kontinental Hockey League. He played in three KHL all-star games, skated for Russia at the 2014 Sochi Olympics, and helped his country win the gold medal (2014) and silver medal (2015) at the past two IIHF World Championships.

He signed with the Flyers on May 20, and since then he’s been trying to adjust to all the new things that have been thrown at him on and off the ice.

“It’s the speed and rhythm of the games,” Medvedev said through a translator. “During the preseason, I thought that I will be able to adjust rather quickly. But the first two games of the regular season showed me that I am far behind. I still need to learn a lot about the League and the plays.”

“I am constantly learning new words and already have some vocabulary that’s almost enough to understand what the coaches tell me,” Medvedev said. “For anything else, I use help of a translator.”

Among those helping in the effort has been defenseman Radko Gudas, who has been partnered with Medvedev the past three games.

Gudas and Medvedev sit next to each other in the locker room and have tried to have most of their conversations in English. Gudas, who is Czech, said he speaks some Russian; that helps. He also has some outside assistance available if needed.

It might not take too long until he’s fluent in the NHL style of hockey.

“It took me a couple of games to get used to the rhythm of the play here during those [early games],” Medvedev said. “At the beginning, it was difficult, and I committed a few mistakes. However, after each game, I spoke to the coaching staff, and they showed what was positive and negative in my performance. Therefore, after a couple of games, I feel that I am playing better.”

Flyers coach Dave Hakstol likes what he’s seen, using Medvedev on the point on the second power play in addition to his 5-on-5 time.

“He’s continuing to make the adjustment,” Hakstol said. “He’s still pushing every day to become more and more comfortable with everything on the ice, off the ice. That’s something that we’re just trying to make sure that we do that together, one step at a time. Not trying to make any big leaps forward; every day, every week making a little bit of progress, and that’s been a credit to him. He’s worked very hard at it.”