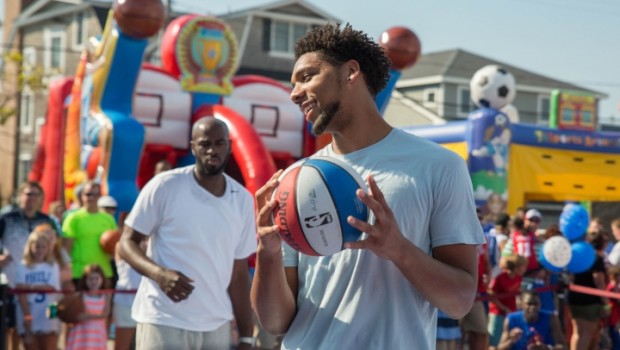 Big Shot Rob Covington and Jah Okafor had some fun at the Beach Bash.

It’s only August 25, and Sixers’ training camp is still five weeks away, but it’s never to soon to assess the team’s offseason, which has been buried in the mania that has surrounded the Eagles’s terrific start.

As NBA.com and TNT analyst David Aldridge has pointed out:

CEO Scott O’Neil has to take a lot of the bullets from the public and from advertisers and corporate sponsors while GM Sam Hinkie lays deep, deep, deep, deep undercover. Don’t get me wrong. No one has to hold any telethons for O’Neil; he’s well-paid for his work and he’s a grown man. But it is a tough job having to explain what the Sixers are doing to those who are paying for the season tickets and buying the advertising.

The Sixers were hoping to take D’Angelo Russell with the third pick, but when the Lakers scotched those plans, Philly had to “settle” for Jahlil Okafor (above), the consensus first-team All-American as a freshman for Duke who many had pegged as the first overall pick.

By far the best big man Philly’s had since this, uh, rebuild began, Okafor will improve the looks of a team that was sixth in three-point attempts last season, but just 11th in 3-pointers made. Nik Stauskas, who shot a decent 37 percent on threes in his rookie season playing off of All-Star DeMarcus Cousins, should do better with copious minutes at the 2.

Philly can only hope that Tony Wroten (torn ACL) returns to form at the point after playing just 15 games last season. There isn’t much proven talent behind him. It’s a long, long way back to respectability in Philly — made harder by another season lost to injury for Joel Embiid — but at least the skeleton of a decent starting five (with Nerlens Noel at center) is starting to come together.