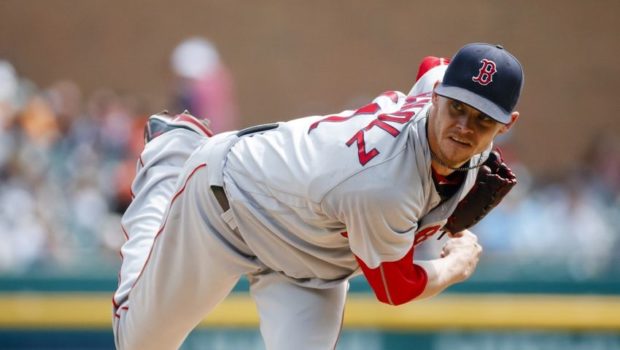 AT 32, DOES NEW PHILLIE CLAY BUCHHOLZ HAVE ANYTHING LEFT?

So, what exactly are the Phillies getting in 32-year-old Clay Buchholz, whom they traded for yesterday?

Nine years ago, Baseball America rated Buchholz the fourth-best prospect in all of baseball!

Buchholz was regarded as elite, a perceived future ace, and one who had tantalized Red Sox fans by pitching a no-hitter in his second big league start in September 2007.

He was a supremely promising young pitcher. As it turned out, through his spotty nine-plus years in Boston, he reminded us of that promise just often enough to drive everyone nuts.

Buchholz’s tenure of occasional excellence and recurring exasperation ended when the Red Sox traded him to the Phillies for minor-league infielder Josh Tobias, a 24-year-old who hasn’t taken a swing in Double A yet.

The final ledger for the lanky 32-year-old righthander: 81 wins, 61 losses, a 3.96 ERA, two World Championship rings (in ’07 a bit player who wasn’t even with the team in the postseason, in ’13 as a participant), and one enigmatic legacy.

That’s not a bad run. It’s also not close to the whole story, which is why such an uneven deal, at least in terms of professional accomplishment so far, was greeted in Boston with a satisfied chorus of good riddance. Through the years, Buchholz would occasionally — but only occasionally — live up to those enormous early expectations. His most complete season came in 2010, when he went 17-7 with a 2.33 ERA (second to Seattle ace Felix Hernandez in the American League) in 173⅔ innings.

Spliced in with those good times were too many down years — a pitcher of Buchholz’s ability should not have single-season earned run averages of 6.75, 5.34 and last season’s 4.78 on his baseball-reference page. There were too many injuries and as a consequence, he never could be counted on to supply enough innings (his career-high is 189⅓ from the 2012 season, when he went 11-8 with a 4.56 ERA).

He was outstanding during the Red Sox’ essential fast start in that special 2013 season, and finished the year with a 12-1 record and a 1.74 ERA. But, as always, there was a catch, an aggravating plot-twist somewhere along the way to fulfillment. He made just 16 starts — he was derailed by a baffling shoulder injury in June that was apparently caused by holding his infant daughter in bed at an awkward angle. He didn’t pitch again until September. While he did contribute that postseason, most notably with four innings in Game 4 of the World Series in which he allowed just one unearned run, it once again felt like Buchholz’s potential brilliance had been abbreviated by odd circumstances.

It seems appropriate that his final appearance with the Red Sox came in a game in which they were counting on him dearly, and he pitched OK, but didn’t last long and couldn’t deliver on the hope. Buchholz allowed two earned runs in four innings in Game 3 of the American League Division Series against the Indians. Cleveland won, 4-3, to sweep the series. The Red Sox season ended that day. It turns out so did Buchholz’s Red Sox career.

While the Red Sox have tremendous quality and depth of starting pitching, that can change with one twinge in an important elbow. We still remember the lesson of trading Bronson Arroyo for Wily Mo Pena before the 2006 season; saying you have pitching depth is a fine way to tempt the baseball gods into taking it away. Buchholz might have brought more in return near spring training, which makes me wonder if the real impetus for this trade was to clear salary room to bring in another player. I suppose it’s appropriate for Buchholz to leave us with one more mildly befuddling moment as he goes.