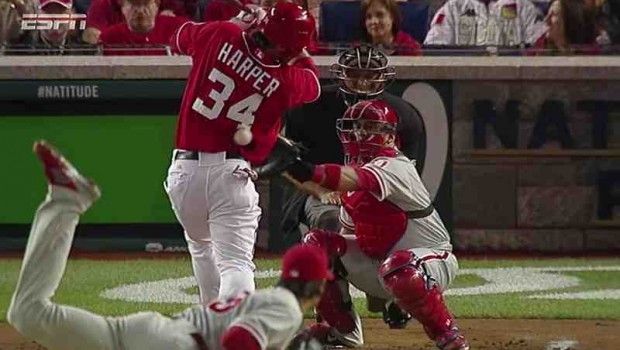 In 2012, Hamels hit Harper, who was a 19-year-old budding star. Yesterday in DC, Harper went 0-for-4 against Hamels with two strikeouts.

Three years can be an eternity.

Especially in the life of a baseball player in the major leagues.

Cole Hamels first peered from the mound at Bryce Harper three years ago, on a Sunday night at Nationals Park.

Hamels saw a skinny, brash 19-year-old who had been anointed baseball’s next superstar.

Hamels used as his message a 93-mph fastball to the back.

“Looking back, I was fairly shocked at him hitting me,” Harper told the Washington Post Friday afternoon. “I thought I would get it from somebody, just because of who I was. But I didn’t think it would be Hamels.”

Hamels met Harper again Saturday afternoon at Nationals Park as Harper has emerged as the most devastating force in the National League. The hype surrounding Harper has receded, replaced by the black-and-white results from the first seven weeks of his season. He entered Friday leading the majors in runs, walks, on-base percentage and slugging percentage.

Does baseball still resent Harper because of who he is? Gauging by his ejection Wednesday night, which home plate umpire Marvin Hudson issued despite limited provocation from Harper, umpires still give him scant rope. In opposing clubhouses, though, production is currency. Harper’s dazzling start powered the Nationals as they became the hottest team in the majors, which is all he cares about. Opponents can no longer gaze at the commercials, headlines and praise attached to Harper and think, “What’s he done?” They must look at his numbers, with no shortage of awe, and admit, “He’s doing it.”

Harper said he has noticed a difference in how players view him compared to the day Hamels drilled him. He has met many of the men he plays against and built relationships — he is a serial tester of other players’ bat models, for instance. There has always been a gulf between Harper the person and Harper the persona, and as the league discovers that it has been less prone to hurl fastballs at him just for being Bryce Harper.

But Harper remains clear about the social aspect of playing in the majors: He is not on the field to play nice or make friends. If the majority of baseball detests him, so be it.

Harper has faced Hamels 34 times, more plate appearances than he’s had against any other pitcher, and swatted eight hits with five walks, five strikeouts and a double, good for a .286 batting average, .412 on-base percentage and .321 slugging percentage. He says he draws no residual motivation from their first meeting — “I haven’t thought about it since, honestly,” Harper said — but he enjoys the challenge of facing him.

“He’s a competitor out there,” Harper said. “He has a sick change-up. His change is one of the best in baseball. . . . He’s one of the best lefties in the game. It’s a lot of fun going after a guy like that. He’s tough. It’s always a test.”

It will be a test, too, for Hamels. He is one of the most accomplished pitchers in baseball. And when Harper steps to the plate Saturday, Hamels will see something different than he saw three years ago. He will see an equal.