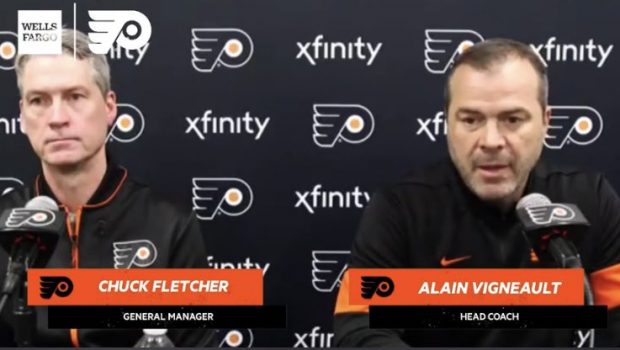 3 CHOICES TO FIX THE DUMPSTER FIRE THE FLYERS HAVE BECOME!

Flyers management held a Zoom presser yesterday in which chairman Dave Scott, GM Chuck Fletcher and coach Alain Vigneault tried to put a happy face on the most disappointing season in decades.

They missed the playoffs again and they looked terribly doing it.

Did COVID play a role? Sure.

Did the Flyers really miss retired defenseman Matt Niskanen that much” Evidently.

The Athletic’s Charlie O’Connor puts his finger on the solutions:

Chuck Fletcher and the front office really have three options.

They could chalk this season up to being a Murphy’s Law year and largely run it back for a second straight season, figuring that 2019-20 is a better barometer of this team’s true talent level than 2020-21 due to the inherent strangeness of the pandemic year.

They could determine that this team simply is broken on too many levels to fix and look to blow it up in response to this debacle.

Or, they could try to thread the needle to a middle ground — a shakeup but with the goal of improving the roster in the short term and turning next season into the year that they hoped 2020-21 would be.