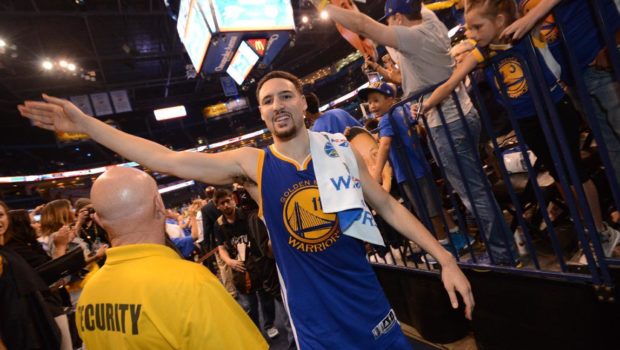 Tonight’s game 7 of the Western Conference finals between the Thunder and the Warriors may have already set a record.

According to ticketing search engine TiqIQ, tonight’s game has the second-highest list prices for an NBA game 7 in the past five years ($960 per ticket).

The only game 7 to top tonight’s matchup in Oakland was the 2013 NBA Finals Game 7 between the Miami Heat and San Antonio Spurs ($1,346 per ticket).

The Warriors put the few remaining tickets on sale Sunday night, with prices ranging from $230 to $2,150. They sold out in less than five minutes.

Those prices did not include any floor seats, which were sold out. But someone did go to the Warriors’ resale site, run by Ticketmaster, and purchased two floor seats for $29,000 each.

A spokesman for StubHub, which has appealed a federal judge’s decision to dismiss its lawsuit against the Warriors and Ticketmaster, said its average sold ticket for the game was $824, with the cheapest seat at $359. StubHub has accused the team and Ticketmaster of conspiring to control both the primary and secondary ticket markets.

Warriors officials have said that having Ticketmaster control both the primary and resale markets helps to make sure tickets are authentic. Warriors spokesperson Lisa Goodwin said the team had to turn away 80 fans for Game 5 at Oracle Arena on Thursday night because the tickets scanned as fraudulent.