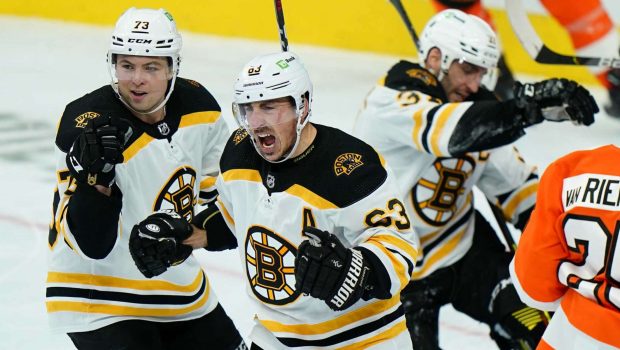 27 SECONDS THAT COST THE FLYERS A WIN OVER BRUINS!

If you still think the Flyers are better than the Boston Bruins after last night’s gut-wrenching loss, you might have a sober second thought.

Sean Kuraly and Brad Marchand scored 27 seconds apart in the third period to lead Boston to a 2-1 victory.

Tuukka Rask made 23 saves for the Bruins, who have won seven of eight overall and all four matchups against the Flyers this season.

The Bruins came back from two-goal deficits in their previous two victories before their latest turnaround.

“We’re just deep and have the belief in our room that we’re never out of the game,” Marchand said. “We almost seem to play a little better when we’re down. We know we can come back from any situation.”

Boston has more third-period goals (19) than all other periods and overtime combined (15).

“For us knowing we’re behind, knowing there are goals in that room, you don’t panic,” coach Bruce Cassidy said. “You need good players and guys who are confident they can come back.”

Kuraly netted the game-winner with a wrist shot from above the left circle that beat Brian Elliott on the glove side, went off the post and in with 7:32 remaining. Elliott blamed himself for the loss, and Vigneault said the veteran would like to have Kuraly’s goal back.

Even Kuraly didn’t expect it to go in — although he didn’t act like it.

“I’d be lying if it came off my stick and I thought I was going to score,” he said. “But I’ll put my hands up and pretend.”

Marchand tied the game at 1, scoring on a scramble in front as he was falling to the ground. He has six goals and six assists during an eight-game point streak.

“I was just trying to get in there and get a whack, and luckily it went in,” Marchand said.

The teams next will meet on Feb. 21 as part of the NHL’s outdoor series at Lake Tahoe.

Van Riemsdyk put the Flyers in front with a deflection of Erik Gustafsson’s shot from the point 27 seconds into the third. The power-play score was the sixth goal for the veteran winger, who is among the NHL leaders with 16 points. It also gave him 11 points during a six-game point streak.

The game was scoreless through two periods in a defensive struggle.

The Flyers’ best opportunity occurred when Joel Farabee was awarded a penalty shot after getting pulled down on a breakaway attempt with 3½ minutes left in the second. But Rask denied Farabee, who tried to shoot low through Rask’s pads.

“That’s a huge save,” Cassidy said. “You need those, especially today when goals are going to be tough to come by. We expect that from Tuuka.”

The Bruins had a couple of chances on a power play with five minutes left in the second, but Elliott made a pair of good saves. First, he denied David Pastrnak with a pad stop before using his right arm to keep Charlie McAvoy’s attempt out of the net.

Pastrnak, who had three goals and an assist in Wednesday’s 4-3 overtime win, had an assist on Marchand’s goal.