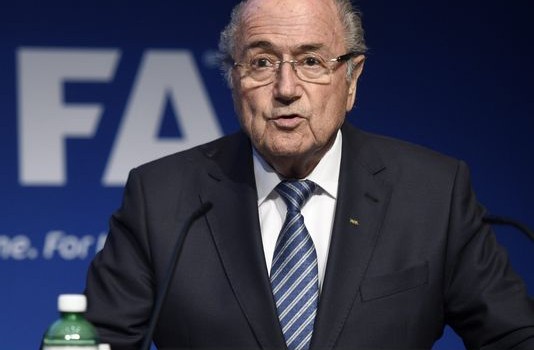 This is what’s known as being the feds to the punch.

Blatter, who has been in charge of the organization since 1998 and won re-election for a fifth term Friday despite allegations of mass corruption within FIFA, announced at a press conference in Zurich that he would step down after a special congress is called between December and March to appoint his replacement.

“This mandate does not seem to be supported by everybody in the world of football,” Blatter said. “FIFA needs a profound restructuring.”

The development came as a stunning turnaround, following the 79-year-old’s triumphant response to his victory over Prince Ali bin al-Hussein of Jordan in the presidential race just four days earlier. At that stage, it appeared certain that he would remain in charge for another four years.

“The interests of FIFA are very dear to me and that is why I have taken this decision,” Blatter said. “I repeat what counts most to me is the FIFA institution and football around the world.”

Blatter was not named in the indictment, which included 47 counts including racketeering, wire fraud and money laundering against 14 individuals.

The departure of Blatter will spark the potential for a complete overhaul of FIFA, according to the comments of Domenico Scala, head of FIFA’s audit and compliance committee, during Tuesday’s press conference.

“We want to fundamentally reform the way in which people see FIFA,” Scala said.

The 24-person executive committee that currently undertakes all keys decision is likely to be revamped and greater transparency will be a leading priority.