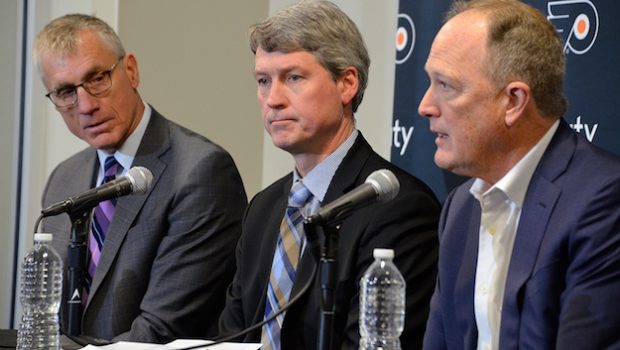 “This is my seventh season since joining Comcast Spectacor and the Flyers, and this is definitely the most optimistic I have felt heading into the season opener,” CS CEO Dave Scott told the Inky in Prague, where the Flyers open the season tomorrow against Chicago. “It’s a long season and there are always unexpected twists, but we are in position to take some important steps forward.”

Although one might argue that he is whistling past the graveyard of so many lost seasons that started with hype and hope and ended in early April as the rest of the NHL played for the Cup.

The Flyers have missed the playoffs in four of the last seven seasons.

The Flyers have a different look besides three new coaches. They will start the season with three key additions and three rookies on the 20-man roster. Scott (above right with Paul Holmgren and GM Chuck Fletcher) likes the youth, and commended the former general manager who oversaw the drafts that have rebuilt a sagging farm system.

“I would like to acknowledge Ron Hextall for the pipeline that was created through the draft,” he told the Inky, “and when you combine that young talent with a strong core of veterans and now the NHL’s most experienced coaching staff, Flyers fans have a lot to be excited about this year and for years to come.”

He believes general manager Chuck Fletcher made some shrewd offseason moves, especially trading a low draft pick for second-line center Kevin Hayes and signing him to a long-term contract less than two weeks before he was due to become an unrestricted free agent.

The acquisition “looks more significant than ever,” Scott said, mindful that center Nolan Patrick is sidelined indefinitely because of a migraine disorder. “… Chuck’s move to sign Hayes prior to free agency was impressive, and may turn out to be a major factor as we start the season.”

Scott said he was “hopeful” Patrick recovers and returns to the lineup soon, but he knows there are no guarantees. “One or more of our rising stars will have an opportunity to shine at the NHL level while he is out, but all of the great things Hayes brings to the team are standing tall as we enter the season,” he said.

The Flyers haven’t won a playoff series since 2012, well, a lot of his faith comes from having the 12th-winningest coach in NHL history behind the bench.

“Alain Vigneault has such presence, and I love how determined he is to win his first Stanley Cup,” Scott said, adding he was “impressed with his intensity and grasp of the speed and pressure our team needs to be successful.”

This is the first season that the Flyers’ general manager is reporting directly to Scott, who said he was “blessed with an outstanding mentor in Ed Snider. I have a strong support system that includes Paul Holmgren, Bill Barber, and Bob Clarke as my day-to-day focus has now gravitated to the Flyers’ hockey operations and working directly with our GM.”

Scott said he now feels “very comfortable in this role and where we are headed as an organization. Chuck is a great partner and has impressed me from the start. Since taking over as GM, he has led us through a successful draft and several initiatives that have significantly strengthened our overall depth.”

Having hired Valerie Camillo as president of the Flyers’ business operations has allowed Scott to work more closely with Fletcher on hockey operations.

“There are stretches where I talk to him every day,” Scott said, “but he runs the front office as he sees fit. My philosophy is to bring in successful people and then let them do their jobs. I am a sounding board for Chuck and provide feedback from an ownership standpoint, and my most important job is to make sure he has the resources he needs to be successful.”