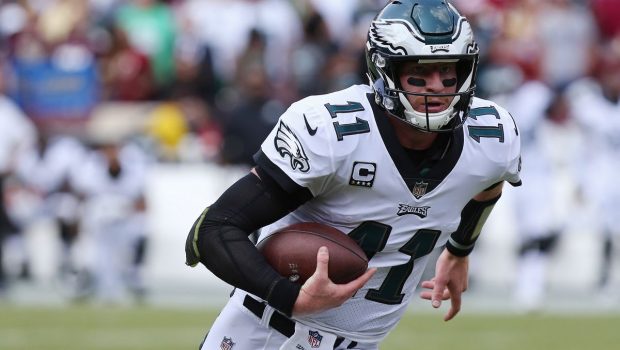 ’17 MVP STATUS TO ’20 MEDIOCRITY: HOW EAGLES WENTZ HAS FALLEN!

Says The Athletic’s Sheil Kapadia, who ranks Carson Wentz as the 12th-best QB in the NFL:

What’s the difference between Wentz now and the 2017 version?

Athletically, he has not looked like the same guy in terms of being able to make plays outside the structure of the offense, so the injuries are likely a factor there. And the lack of speed/wide receiver play last season hamstrung the offense.

Having said that, if we look at the numbers, it’s reasonable to make the argument that the most likely outcome for Wentz is that he’s around the 12th-best quarterback most seasons.

In 2017, 7.5 percent of his pass attempts resulted in touchdowns. That’s difficult to replicate year over year. His accuracy issues are as bad now as they’ve ever been. Fumbling has been a consistent problem. And now he’s adding more negative plays in the form of sacks and interceptions.

Wentz is unlikely to be as bad as he’s been in the first two games. The bad news: He’s started 58 games, and future decisions can no longer be based on what he did during a 13-game stretch in 2017.