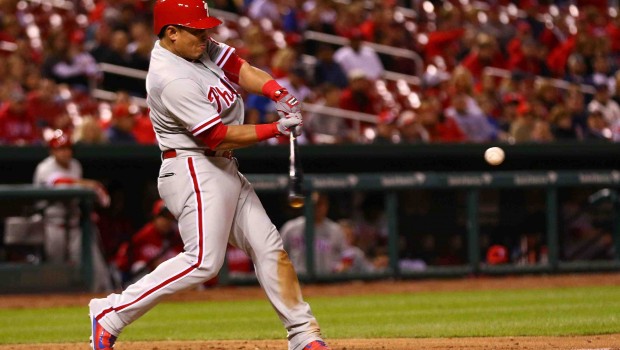 ON 2015 PHILLIES, FOUR RUNS QUALIFIES AS AN EXPLOSION

You could have knocked Cole Hamels over with a feather.

Or at least four feathers from the wings of a Cardinal.

Hamels started the bottom of the seventh with a lead!

The Phillies had scored just three runs for Hamels in his first four starts this season, which was the fourth-worst run support in baseball.

“It really does energize anybody, because you want to hold the lead for your team,” Hamels said after the 4-1 victory over the Cardinals.

Cody Asche led off the inning with a single. The Phillies then executed a hit-and-run with Carlos Ruiz lacing a single to right field to put runners on the corners with no outs.

“That’s our game,” said Ruiz, who went 4-for-4 with a double to raise his batting average from .196 to .260. “That’s what [Phillies manager Ryne] Sandberg said in spring training. We have to do the little things and make something happen. We had a big hit right there. That was great baseball.”

Freddy Galvis hit a ground ball to Cardinals third baseman Matt Carpenter, who caught Asche in a rundown for the inning’s first out. Sandberg then elected to have Hamels hit for himself, rather than calling for a pinch-hitter.

Hamels had allowed one run in six innings to that point.

“It played in the decision to let him have an at-bat in the seventh inning,” Sandberg said. “Not only can he handle the bat and bunt, but also to give him another chance for a win. I thought that would be big for him.”

Hamels dropped a sacrifice bunt to advance runners to second and third. Ben Revere then dropped a ground-rule double on the left-field line to score both runners to make it 2-1. Odubel Herrera followed with a single to score Revere to make it 3-1.

It would be plenty for Hamels. Then again, on most nights, it is more than plenty.