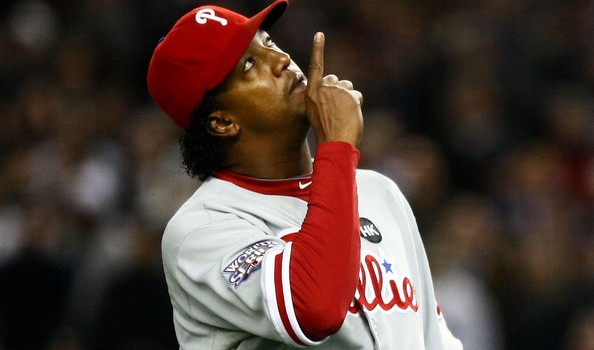 2009, WHEN HALL OF FAMER PEDRO MARTINEZ WAS A PHILLIE!

Pedro Martinez is going into the Hall of Fame this Sunday as a member of the Boston Red Sox, which is as it should be.

But in 2009 he joined the Phillies and was a contributor to the team’s road to the World Series.

The last game Martinez pitched was Game 6 of the 2009 Series, and he lost to the Yankees, giving manager Charlie Manuel the last four innings in that wonderful right arm.

“Grateful and sad at the same time,” Martinez said of the opportunity to start in what turned out to be a 7-3 loss in the Yankees’ clinching win. “I know that everything I had I left on the field. I have no regrets. I was asked to do a job after being out so long with my shoulder. I wished I could have been better. But that’s what I had left.”

The last three batters he faced were Robinson Cano, who flew out to left, Nick Swisher (strikeout swinging), and Brett Gardner (lined to second).

The Phillies had signed Martinez on July 15 and he made three starts in the minors after he rehabbed his shoulder. He made his Phillies debut Aug. 12 and went 5-1 with a 3.63 ERA. The Phillies were 8-1 in his nine starts.

During the last two months of the regular season, Martinez won a 2-1 beauty against the Giants’ Tim Lincecum, who went on to win his second consecutive Cy Young. Martinez struck out nine in seven innings, and retired 13 consecutive batters at one point.

He made three postseason starts and one was a gem.

Game 2 of the NLCS against the Dodgers featured an amazing pitchers’ duel between Martinez and Vicente Padilla.

Martinez pitched seven innings of two-hit shutout ball, while Padilla allowed just one run in 7⅓ innings. The bullpen allowed the Dodgers to score twice in the eighth for a 2-1 decision, the Phillies’ only loss in the five game series.

Martinez started Game 2 of the World Series. He made it into the seventh, allowing solo homers to Mark Teixeira and Hideki Matsui along the way, but the Phillies were shut down by A.J. Burnett and Mariano Rivera in a 3-1 loss.