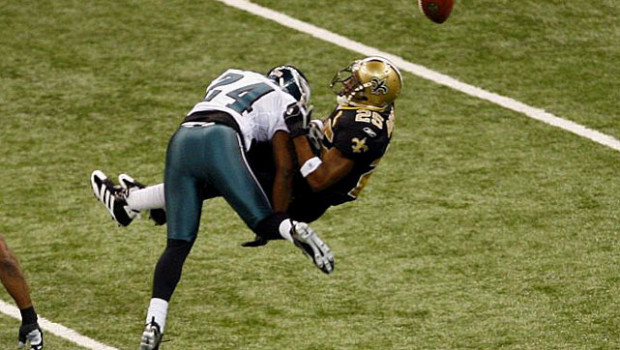 Travel back to the 2006 NFL Playoffs in January 2007, and the Eagles and New Orleans Saints weren’t even one minute into their NFC Divisional Playoff game when Eagles cornerback Sheldon Brown de-cleated Bush on a swing pass from Drew Brees.

Bush didn’t even have time to turn his body before being laid out. He barely had time to breath. It’s no surprise he didn’t hold on to the football, because his body looked like it’d been hit by an 18-wheeler. Then, he got up as if everything was OK before realizing he might have ruptured all his organs on the play.

Big hits like these, especially early in games, usually set the tone. That wasn’t the case for this one, because the Saints went on to win this divisional round matchup, 27-24. They then lost to the Chicago Bears, who fell in the Super Bowl to Peyton Manning and the Indianapolis Colts.

Reggie Bush was just a 21-year-old rookie playing in his second career playoff game. He’d amassed more than 1,300 yards from scrimmage and eight touchdowns despite being a newcomer to the league.

This is still the CRAZIEST hit we've ever seen#FlyEaglesFly pic.twitter.com/URbEd7bCk2