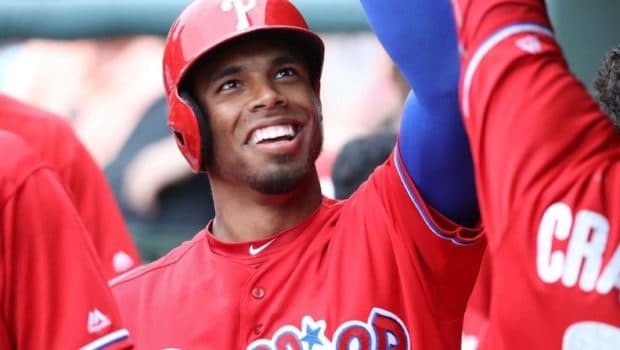 20 GAMES IN, CAN PHILLIES’ WILLIAMS POSSIBLY BE THIS GOOD?!

Nick Williams hit not one but two triples in the Phils’ 10-3 win over the Marlins, becoming the first Phillies rookie to hit two in a game since Jimmy Rollins on June 24, 2001.

“That’s awesome. I don’t even really have a response to that,” Williams said. “That’s crazy. Jimmy Rollins was a legend here and an amazing player.”

In the first inning, the left-hander smacked a liner to the right-center gap to plate the club’s first run. He then scored the second on a Maikel Franco sacrifice fly.

In the seventh, he split the same gap again before adding another RBI on his sacrifice fly in the ninth. Williams finished the three-game set in Miami 6-for-14 with four extra-base hits and six RBIs

“I’m not gonna say a whole lot about him. I’m just not gonna jinx myself,” Phillies manager Pete Mackanin said. “Just wanna keep watching him continue to play and be aggressive at the plate.”

Since his June 30 debut, all Williams has done since is wreak havoc.

Through 16 games, the 23-year-old acquired from the Rangers in the 2015 Cole Hamels trade is hitting .316 and has posted a .963 OPS. He has three homers, four doubles and now two triples to his name.

“There’s veterans that don’t want to hit fourth. They just don’t like to have that pressure. Nick is just feeling so good about himself,” Mackanin said. “He’s in the big leagues for the first time. He’s swinging aggressively and looks like he’s having fun out there. I figured why not put him third? He’s aggressive. I’ll take aggressiveness over caution anytime.”

Though Williams said he hadn’t hit third all year in the Minors, he’s relishing the opportunity. His feet are wet, and he’s playing like his hair’s on fire, but he’s staying relaxed.

“It’s just another spot in the lineup,” he said.