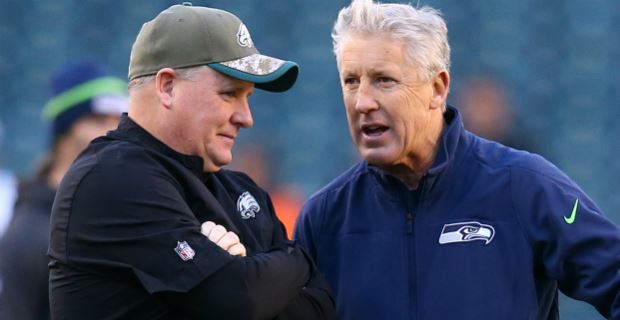 2-TIME SUPE WINNER JOHNSON: ‘CHIP KELLY A RISK-TAKER LIKE ME!’

And MMQB’s Emily Kaplan recently interviewed two-time Super Bowl-winning Cowboys coach Jimmy Johnson for his thoughts on Kelly. Johnson was once in a similar situation to the one Kelly finds himself in now.

While many are quick to recognize Kelly’s greatness as a coach, others are skeptical of his abilities overseeing the Eagles’ player personnel department. Johnson shared some of the advice he gave to Kelly when the two talked earlier this offseason.

Here are some excerpts:

“Chip and I have talked a couple of times, and he’s a very private guy; so much of what we discuss should not be shared. But I did give him one piece of advice this year. He wanted to know what it’s like to be the decision maker as well as the coach. I told him this: You have an advantage in the draft because you know these players. You’ve been in a lot of their homes, you’ve watched them play closely. So the draft is when guys like you and I have the advantage.

The problem I ran into in Miami (I didn’t have it in Dallas because free agency had just begun) was that during the season, I was so busy that I couldn’t stay on top of all of the things I wanted to: picking up players from the street, making some moves, especially on the bottom end of your roster. You’re so busy prepping with your current team for that week’s game that you can’t do it all by yourself. The job is overwhelming to do it 12 months of the year all by yourself. I found that out. My advice would be to have somebody—and not a group of people, just one person that you trust, that you like, that’s loyal, that’s like-minded—do those type of things. That will help because during the season itself, the job can be a little overwhelming. But in the offseason? The draft and free agency? Take advantage of your talents. You’re good at evaluating players because you did it in college just like I did in college, so that’s where you can shine. But during the season is when you’re going to need a little bit of help.”

Kelly has been taking advantage of familiarity during the NFL Draft. He’s leaned heavily on drafting Pac-12 players, such as USC’s Nelson Agholor and Utah’s Eric Rowe this year. As for the part about in-season personnel moves, Kelly is yet to be tested in that regard. That might be a time when Kelly has to lean heavily on vice president of player personnel Ed Marynowitz.

The best Johnson quote from this article comes in the final paragraph.

“Here’s the big question: Do you want to play it safe and be good or do you want to take a chance and be great? If you’re not afraid to fail, you can do some great things in this league. But most people are afraid to fail, so they play it safe. I always liked to take risks because I was always confident in my abilities. I think—no, I know—Chip is confident in his abilities, too.”

The Eagles didn’t hire Chip Kelly to settle for mediocrity. They wanted to swing for the fences. They took a big risk. It remains to be seen if that risk will pay off. By giving Kelly control over the Eagles’ player personnel department, the franchise has ensured the coach will be directly responsible for any his success or his failure.

Kelly has won 20 games in two season, which is encouraging. On the other hand, he’s still winless in the playoffs. The drastic moves he made this offseason were done with the intent to take the Eagles from a “good” team to a “great” one. Time will tell if it pays off.