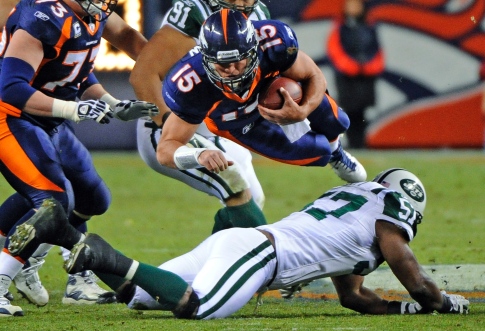 2-PT. RULE CHANGE DESIGNED FOR TIM TEBOW AND THE EAGLES!

At today’s NFL owners meeting in San Francisco, the powers that be will consider at least one rule change that is tailor-made for the Eagles:

Giving Tim Tebow an even better chance to make the team and be a contributor in 2015.

Making the point after more challenging could sway coaches to try the two-point conversion more often. There were only 59 such attempts (and only 28 successful ones) in 256 regular-season games in 2014.

But one intriguing possibility is that more two-point attempts could lead to two-point conversion specialists. The Eagles, who want the two-point try attempted from the 1-yard line, might not have any use for Tebow as a quarterback. But could coach Chip Kelly decide to make Tebow his go-to player for two-point tries? A mobile, option-style quarterback might be able to excel in such a role and be more of a weapon than a quarterback whose only option is to throw in a very tight space.

Tebow scored 12 rushing touchdowns in two seasons with the Denver Broncos. Four of them were from 2 yards or less, and he was also two-for-two on two-point conversions — both rushes.