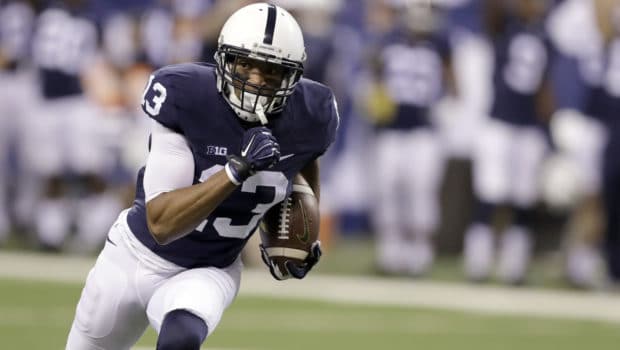 Penn State will have to face USC in the Rose Bowl in four days without two of their players:

Junior wide receiver Saeed Blacknall (above) and sophomore linebacker Manny Bowen will miss the Rose Bowl, suspended for a violation of team rules.

Their absences will leave Penn State without one of its most lethal deep threats on offense and a reliable starter on defense.

“I think it’s a learning experience for everybody,” defensive coordinator Brent Pry said after the team’s practice yesterday at the StubHub Center. “I think everybody makes mistakes, and we’re able to have everybody learn from mistakes, you know? I think we’ll be better for it.”

Pry was specifically focused on Bowen, who played in all 13 games for the Nittany Lions this year, starting 12.

He was tied for fourth on the team with 68 tackles, including 8.5 tackles for loss and two sacks.

With Bowen out, redshirt sophomore Koa Farmer is likely to get the starting nod at linebacker alongside Jason Cabinda and Brandon Bell. Farmer started one game for the Nittany Lions this year, against Maryland, and played in all 13.

Pry spoke highly of Farmer’s special teams role this season, and Cabinda and Bell both sounded confident in his ability to rise to the occasion.

Not that he would need it, but Farmer, the lone Californian on the Penn State roster, might get an extra boost of adrenaline playing less than 20 miles from his hometown.

“It couldn’t be a better opportunity for him to be honest,” Cabinda said. “He’s coming home. He’s from Cali, and you know, being able to come in and be able to make more plays, it’s huge for him. We’re confident in him and he’s made plays for us all year, to be honest. It’s exciting to see him get more reps and do his thing out there.”

On the other side of the ball, the Penn State offense will have to make do without Blacknall, who torched Wisconsin in the Big Ten championship earlier this month. He had 15 catches for 347 yards and three touchdowns on the year, but had six receptions for 155 yards and two scores against the Badgers.

The most likely beneficiary when it comes to playing time will be DeAndre Thompkins, who started six games when Blacknall was injured earlier in the season. During that span, Tompkins caught 17 passes for 285 yards and a touchdown.

“It’s just disappointing,” Cabinda said. “Those guys really want to play. It’s an opportunity they are missing out on, no doubt. But at some point, it’s something you have to move on from and prepare, knowing that we’re not going to have them. Simple as that.”