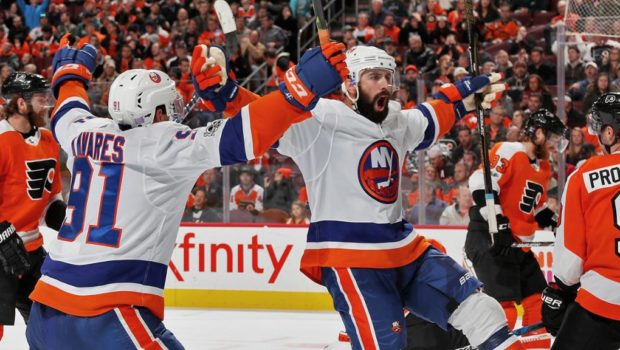 Can the Flyers possibly be this bad?

Or are they just getting their stink out early in the season before rushing toward the playoffs?

But they look pretty bad to me.

Nick Leddy scored at 2:44 of overtime to give the New York Islanders a 5-4 win over the Flyers.

Joshua Ho-Sang took the puck behind the net before skating back in front and feeding Leddy in the slot. Leddy’s wrist shot beat Brian Elliott to give New York (13-7-2) its fifth win in six games.

“When we start believing that we’re a good team and we can finish games and the way we play is going to win us games, we’re going to start winning. Until then, stuff like this can happen.”

Jordan Eberle began the comeback for New York when he scored on the power play at 4:12 of the third period to make it 4-3. Andrew Ladd tied it at 12:11 when he jammed home Eberle’s feed from behind the net.

Mathew Barzal had a goal and an assist, and Cal Clutterbuckalso scored for the Islanders, who completed a home-and-home sweep of the Flyers. New York defeated Philly 4-3 in overtime at Barclays Center on Wednesday.

Giroux had a goal and an assist, Wayne Simmonds scored and Voracek had two assists for the Flyers. Elliott made 32 saves.

The Flyers have blown two-goal leads in three of its past five games.

“Seven of our last 10 that we’ve gotten a point,” Flyers coach Dave Hakstol said. “So five of those are OT or shootout losses. Again today, a close hockey game all the way through, and we have to find a way to finish the games in overtime.”

The Flyers had a four-goal second period to take the lead. Gostisbehere scored on a delayed penalty at 12:11 to make it 3-2. Couturier chipped a shot over Greiss on a feed from Voracek at 12:30 to make it 4-2.

Giroux scored on a slap shot between the circles at 3:49 to tie it 1-1, and Wayne Simmonds ended a 14-game goal drought when he knocked in Gostisbehere’s shot off the post at 6:28 to make it 2-1.