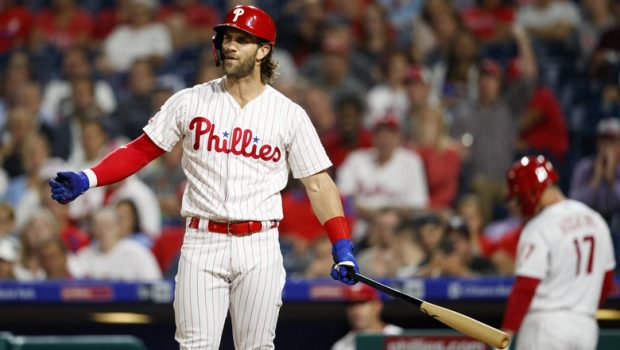 2 1/2 OUT OF WILD CARD, PHILS CAN FEAST ON RED SOX THIS WEEKEND!

After a rare off-day Friday, the Phillies resume their quixotic pursuit of a National League wild card spot tonight at CBP against the defending World Series champ Boston Red Sox.

Of course, the Bosox have had a spectacular fall from grace and have been eliminated from the postseason already.

Nola was dominant against Boston in the teams’ last meeting, giving up just two runs on four hits and striking out seven over seven innings. The outing came in the midst of a strong August for the 26-year-old, but September hasn’t been as kind, with Nola allowing nine runs in 10 innings across two starts.

Though he’s scuffled, the Phillies have played well of late, winning four of their last six after salvaging a split of a four-game series with the NL East-leading Atlanta Braves with a 9-5 win Thursday. Philadelphia is 1 1/2 games behind the Milwaukee Brewers and a half-game ahead of the New York Mets in the chase for the last NL playoff position.

“Obviously we’re watching the other teams that we’re behind and teams we’re trying to keep up with,” catcher J.T. Realmuto said following Thursday’s victory. “We knew they had all won today, so it was a big game for us. We needed to go out and get a ‘W’ and we got it done.”

The Red Sox, meanwhile, are no longer scoreboard-watching. Boston, which snapped a five-game skid with a 7-4 victory over the Toronto Blue Jays on Thursday, is 10 games back of an AL wild-card berth.