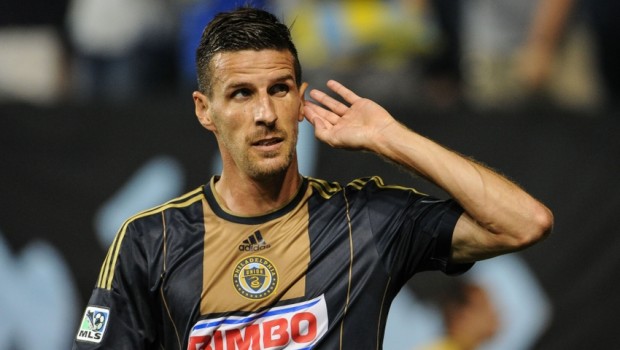 UNION OPEN 2015 WITH A DRAW AGAINST COLORADO

On a frigid day PPL Park, the host Union and the Colorado Rapids battled to a scoreless draw.

Five yellow cards were shown to the Rapids, who went down a man in the 68th minute when Bobby Burling earned his second yellow for a takedown on Sebastien Le Toux (photo above) in the middle of the field. But Colorado held on to remain unbeaten in five games at PPL Park, having earned two wins and three draws all-time at Philly’s home stadium.

The Union are 1-3-4 all-time against the Rapids and haven’t won a season opener since 2011, the last time the club made the playoffs.

Rapids goalkeeper Clint Irwin made four saves to earn the shutout, including a huge stop on a quick-flick header from Conor Casey in the 85th minute on Casey’s first touch after coming on a late sub.

Casey pushed another header wide deep in stoppage time off a free kick from Cristian Maidana. Earlier, Le Toux, who had scored in six straight home openers before Saturday, had his own header go just wide in the 79th minute.

Both teams missed the playoffs in 2014 and showed some new looks to their starting lineup. The Rapids trotted out a unit that featured rookie SuperDraft picks Axel Sjoberg and Dominique Badjistarting at center back and center forward, respectively.

The Union started all three of their big offseason acquisitions with C.J. Sapong and Fernando Aristeguieta getting the nod up top and Steven Vitoria starting at center back.

The Union dominated play for much of the first half. Captain Maurice Edu volleyed Philly’s first corner kick over the net in the 11th minute, shortly before Andrew Wenger blasted one off the crossbar following a failed Colorado clearance attempt.

In the 32nd minute, Sapong picked off a pass and played it ahead to an overlapping Le Toux, who crossed it to Aristeguieta. But the Venezuelan couldn’t get a good foot on the ball right in front of net.

Sapong took a big hit right before the first half and was replaced by Maidana at halftime with the Union switching to a 4-3-3 formation. Maidana had a shot go just wide in the 53rd minute.

Ten minutes later, Badji had his own attempt go wide to spoil a 2-on-1 break for the Rapids.

Saturday’s game marked the only time Philly and Colorado will meet this season. The Union return to action next Saturday at Real Salt Lake. The Rapids host New York City FC in two weeks in their home opener.