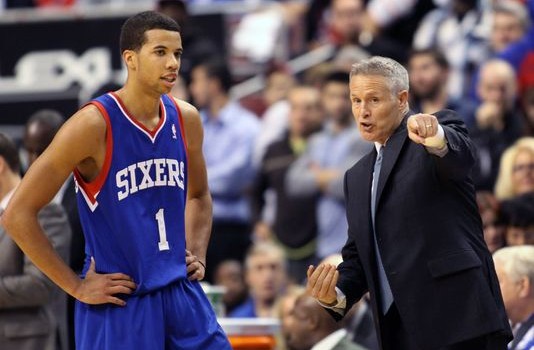 MCW WAS A SUB-PAR SHOOTER AND A SIXER TURNOVER MACHINE

Last night I watched “Philly Sports Scream”/aka “Philly Sports Talk” on which the moderator Michael Barkann rarely talks — he bellows and screams as if there were no microphones.

From the boo-hooing and mewling that Barkann and “Insider” Dei Lynam were exhibiting about the Sixers’ trade of Michael Carter-Williams, I thought they must have been talking about Maurice Cheeks or Wally Jones, two of the great point guards in team history.

In other words, he was a sub-par shooter and a turnover machine, the last thing you want in a coach on the floor.

You think those comparisons are unfair?

Lynam yesterday brought up that he could improve his shot like his new coach Jason Kidd did. Good luck with that. Kidd was a very good player who played the point at Cal before becoming a very good NBA player. Very few players improve their jump shot, even if they have the great Herb Magee as a tutor. Just ask Evan Turner.

There is a tendency in Philly to settle for second best, and that perfectly describes MCW.

Perhaps his foulest mistake was spoiling us with his first game as a rookie.

On the basis of that performance, MCW essentially won rookie of the year against a field of nobodies.

His stat page is filled with the same empty calories that Turner had before he was shipped a year ago.

On a team of rookies and no-hopers, someone has to get the stats.

I am rooting for Sam Hinkie to be wildly successful in his method that has inspired madness among the Angelo Cataldi set.

I love basketball, and I am tired of settling for second-best, as we so often do in Philly.

But I want a real point guard, and I trust Hinkie to find one.