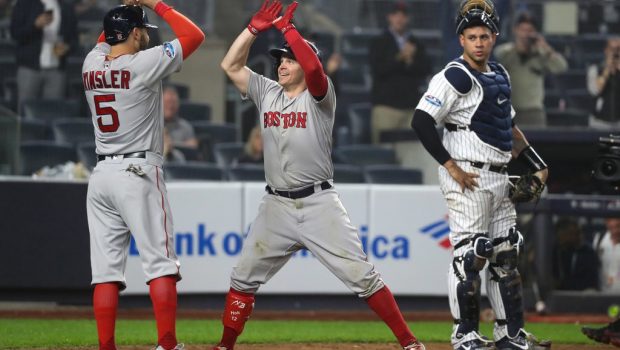 Instead of seizing control of the best-of-five series after winning at Fenway Park on Saturday night, the Yankees were left with the task of trying to avoid watching the Red Sox, who won a franchise-record 108 games this season, celebrate on their home field for the second time in three weeks.

“As awful of a night as it was for us, we’ve got to turn the page,” Boone said. “Tomorrow’s obviously do or die.”

The loss set Yankees records for most runs allowed and the largest margin of defeat in a postseason game, and set an MLB mark for the worst defeat by a home team in a playoff game. It also broke a seven-game postseason winning streak at home for the Yankees.

The Red Sox pounded 18 hits, including four by Brock Holt, who became the first player to ever hit for the cycle in a postseason game. His final hit, a two-run homer in the ninth, came off the last of six pitchers, who was not a pitcher at all.

The Yankees, who will send C. C. Sabathia to the mound tonight against Rick Porcello, can only hope that their veteran left-hander has more to offer than Severino.

“That’s the beauty of baseball – we get to wake up tomorrow and it’s a brand new day and a brand new game,” Aaron Judge said in a mostly empty and somber clubhouse. “So that’s what we’re going to do.”

Lynn walked Mookie Betts to score a run, then gave up a bases-clearing triple to Andrew Benintendi that left the crowd in stunned silence as it stared at the scoreboard that read: Red Sox 8, Yankees 0.

“It was a long inning,” first baseman Luke Voit said. “You’re hoping that someone can make a play and you’re always trying to make that play just to kind of get the morale back. But they can hit and tonight they showed it.”