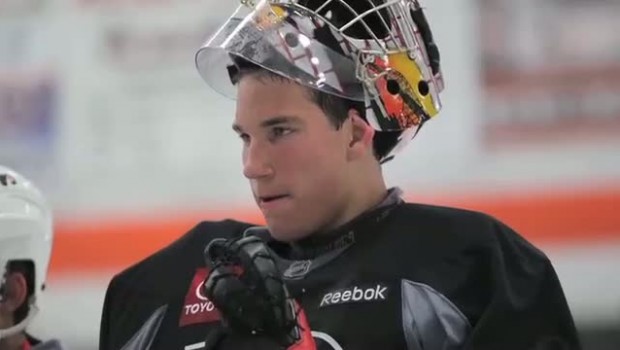 The Flyers have been snake-bitten in the all-important goalie position seemingly since present GM Ron Hextall was in the nets in the late 1980s.

And this year has been no different as starting goalie Steve Mason has been on the shelf now three times — he’ll be out two-to-three weeks after knee surgery.

Welcome to the NHL, Anthony Stolarz.

The 21-year-old from Jackson, N.J. is a prospect the Flyers really like, but he’s just a first-year who still has a lot to learn after being an OHL goalie in junior this time a year ago.

Flyers management, however, felt like it had no choice but to call up Stolarz from the AHL’s Lehigh Valley Phantoms as a replacement to starter Steve Mason, who was injured last Sunday and reportedly had arthroscopic knee surgery on Tuesday.

The Flyers had no other healthy goalies in their system on an NHL contract as of Saturday night when Rob Zepp injured an ankle playing for the Phantoms.

With Mason out at least 2-to-3 weeks and probably longer, the Flyers plan to use backup Ray Emery as their starter and get by for the time being with Stolarz backing up.

By this weekend, Stolarz could be back in the minors with Zepp, the Phantoms’ No. 1 goalie, expected to be recovered. Zepp, 33, was called up twice earlier this season when Mason was lost to injuries and performed well.

Meantime, Stolarz will get a taste of life in the NHL before his time. During Tuesday’s morning skate, he had a blast playing goal with the likes of Claude Giroux and Jakub Voracek firing pucks at him during drills.

“There is a lot to learn going from junior to pro,” Stolarz told reporters. “It’s a big jump, but I think going from the AHL to the NHL is a big jump, as well. I’m here to learn and take in everything I can.”