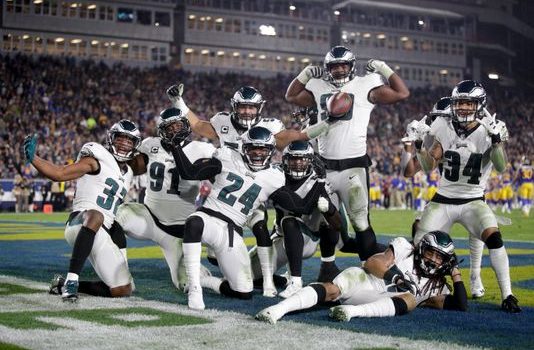 Christmas being the time of the year for giving makes the Eagles’ astounding 30-23 victory over the Los Angeles Rams at the Coliseum more amazing than it normally would have been.

The game was a gift to Eagles Nation, which has been bummed out all season because the Birds haven’t looked anything like the Super Bowl champions that they are.

Especially since the mighty Rams were a 13-point fave.

The Eagles, without their starting quarterback, their playoff hopes on life support, their secondary in shambles, and going against a Rams team tied for the best record in the NFL, somehow overcame all of it.

They beat the Rams behind Nick Foles, replacing Carson Wentz, who is out with a stress fracture in his back.

They survived a last-second pass into the end zone to improve to 7-7, keeping alive their slim playoff hopes.

But they did it much like they did it last year, when they overcame Wentz’s torn knee ligaments against the Rams last December, to then go on to win the Super Bowl. And that is, as underdogs.

This time, it was the ski masks that a few wore in the locker room and on the field during the pregame warmups.

“It was kind of putting our foot in the ground and saying, ‘We’re going to make a stand,’” safety Malcolm Jenkins said. “At the end of the day, if we want to continue to play and we want our dreams to continue, we gotta go take it. That’s why you see the ski masks. That’s why you see the enthusiasm because we got the mentality that we gotta go steal whatever it is that we want.”

They stole it behind Foles, who completed 24 of 31 passes for 270 yards in his first game since Sept. 16, when he started the first two games while Wentz completed his recovery from the torn ACL and LCL.

“We’re going to enjoy this win,” he said. “We’ll take a couple of days and we’ll make those decisions later in the week.”

They did it with Alshon Jeffery, who had a season-high 160 receiving yards, by far his most this season. Jeffery hadn’t played with Foles this season as he missed the first three games recovering from shoulder surgery.

They did it with a running game that turned to Wendell Smallwood, who rushed for 48 yards and two touchdowns.

And they did it behind a much-maligned defense against a Rams team averaging 32.7 yards per game.

But don’t tell Jeffery that the Eagles stole this one.

The Eagles took a 30-13 lead in the third quarter, then had to hold on as the Rams had a first down at the 18 with 4 seconds left. Avonte Maddox, who also had an interception, broke up the potential game-tying pass into the end zone as time expired.

Maddox and Corey Graham had interceptions, and defensive tackle Fletcher Cox, who scared the Eagles with a hip injury in the first quarter, played better than Rams’ DT Aaron Donald, the likely defensive MVP this season.

The Eagles started to pull away in the third quarter when Foles flung a ball 50 yards down the field as he was getting leveled by Ndamukong Suh. Incredibly, both Jeffery and Nelson Agholor had gotten behind their defenders.

What did Foles see on that play?

“I’m pretty sure I was seeing Ndamukong Suh in my face,” he said. “I knew where Alshon was going to be. I had a quick reaction. I was able to see the safeties and just let it rip.”

Jeffery out-leaped Agholor for the ball down to the Rams’ 9.

“I mean, I could see that it was me and Nelson there,” Jeffery said with a laugh. “One of us was going to catch the ball.”

Smallwood ran it in on the next play. The Rams got the ball back after an Eagles’ field goal and faced a 3rd-and-1 from their 34.

Rams quarterback Jared Goff tripped, got up, and under pressure tried to throw a pass that slipped out of his hand and into the arms of Graham, who returned the ball to the Rams’ 12. Two plays later, Smallwood scored again.

They seemed on the verge of putting the game away when Foles threw an interception from the Rams’ 18 on the next series. The Rams answered with a field goal, then added a touchdown with 4:06 remaining.

The situation seemed dire when the Eagles had to punt from deep in their own territory barely a minute later. That’s when JoJo Natson fumbled and the Eagles’ D.J. Alexander recovered at the Rams’ 35. Again, the Eagles couldn’t move the ball, but the Rams were out of timeouts.

So when Jake Elliott missed a 52-yard field goal, there was 1:08 left. Still, the Rams reached the Eagles’ 18 with 4 seconds left before Jared Goff’s pass into the end zone was broken up.

In the first half, the Eagles twice came away with field goals, a bad sign against the Rams, who came into the game averaging 32.7 points per game.

They also didn’t take advantage of Maddox’s interception at midfield in the second quarter.

But in the end, the Eagles had just enough to win.

“Our backs were against the wall, and our guys came out aggressively,” Pederson said.