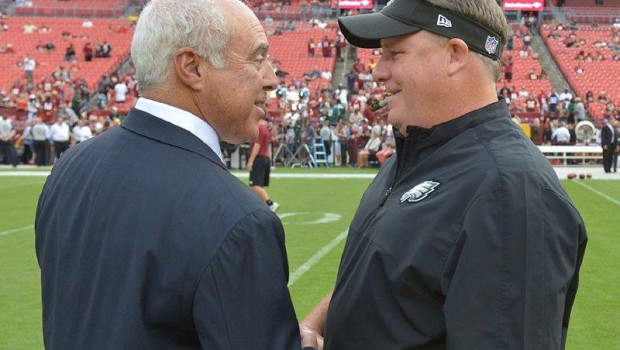 With all the sturm und drang surrounding the Eagles’ front office, it is useful to remember what was written two years ago by CBSSports.com’s Jason LaCanfora, who reported that the team was having trouble nailing down the then-Oregon head coach because of Howie Roseman.

After Kelly decided to come to the Eagles, the report was dismissed by some.

But now, after the team’s decision to fire Tom Gamble, this paragraph by LaCanfora certainly reads differently:

I wish I had a dollar for every time someone told me one esteemed coach or another advised one of the Eagles’ top candidates not to take the job precisely because of Howie Roseman’s presence there. Roseman isn’t the general manager they should tie their wagon to. It’s clear Chip Kelly wasn’t leaving Oregon for anywhere unless he had a large measure of control over the organization, and owner Jeffrey Lurie has already entrusted that to Roseman.

It is not the “Chip Kelly” show, at least not anymore after the firing of Gamble. The two must work together, with Roseman clearly Kelly’s equal, if not superior in the eyes of Lurie.

A situation the Eagles better hope doesn’t leave Kelly looking around and asking if this is what he signed up for.