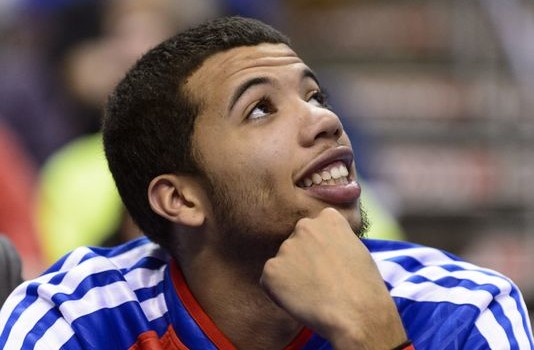 The 11 Sixers currently on the roster are owed $24.25 million combined next season, or in clearer terms, about $750,000 less than the overpaid and underachieving Ryan Howard is paid by the Phils.

The team, which traded its most established player (Thaddeus Young) last weekend, is terrible, and may challenge the 1972-73 Sixers for the worst record in NBA history — 9-73.

But the players have one consolation: the NBA’s salary floor. Teams must spend $56.759 million on players for the 2014-15 season, even if they don’t want to.

Salary cap expert Larry Coon, whose Q&A website offers a thorough explanation for the complicated collective bargaining agreement, says that if the Sixers can’t (and they probably won’t) spend another $32.6 million on players by the time the season ends, that money will be handed over to the the National Basketball Players Association for distribution.

Who gets it? Anyone who played for the 76ers.

The shortfall is based on the team salary as of the team’s last regular season game, but the distribution comes after the league’s audit in July The union informs the league of its proposed distribution within 30 days after the audit, and the team has 10 days after receiving the proposal to distribute the money. There is no set rule for how the money is distributed – the CBA just says “…pro rata or in accordance with such other formula as may be reasonably determined by the Players Association.”

There’s a chance the team adds a few players to pull closer to that limit. But Sixers president Sam Hinkie has made clear that his goal is to lose now in order to stockpile assets for the future. So don’t expect them to go chasing Phoenix Suns restricted free agent Eric Bledsoe with a maximum-level contract or anything.

So the $2.3 million owed to last year’s rookie of the year, Michael Carter-Williams (photo above), could end up being significantly more than that. And this could be very good for Luc Mbah a Moute and Alexey Shved, whom the 76ers received along with a first-round pick in exchange for Young.