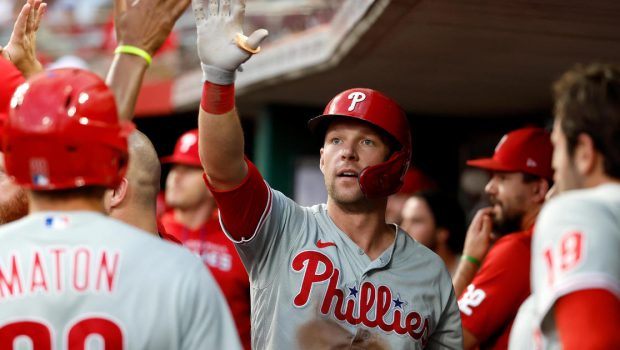 “It was a great offfensive night. Home runs come in bunches. It has been too long for me,” Hoskins said.

“Ten-thousandth win for the Phils. I’ll take a part of history. That’s a lot of wins. I know we have a lot of losses, too. I think I was a freshman in high school in 2007 when the Phils lost their 10,000th.”

Nick Castellanos homered and doubled twice and scored three times. He has homered five times in his last six games.

Darick Hall and Garrett Stubbs also homered for the Phillies, who hold the second spot in the wild-card race. Kyle Gibson (8-5) struck out 11 in six innings in his third straight solid outing.

Hoskins three-run shot drive in the fourth put the Phillies ahead 5-3. He added his 26th home run with a runner on in the eighth.

Hall and Castllanos hit back-to-back home runs in the third. It was the ninth for Hall and the 11th for Castellanos.

Jake Fraley and Jonathan India homered for the Reds.

Center fielder Brandon Marsh was injured trying to catch India’s homer and limped off the field. Nick Maton, listed as an infielder, replaced Marsh with the only other outfielder on the roster, Kyle Schwarber out with a strained right calf. He is expected to return on Friday.

“It was one of those things where you’re going for the ball. You just have to sacrifice the body a little bit,” Marsh said. “I came down a little weird. I was pretty scared at first but I’m feeling better. We’re going to let the team docs get a look and re-evaluate tomorrow. It was in the second row. I had a couple more feet to go.”

The Phillies sent Marsh for an MRI.

“The doctor here thought it was a bone bruise. We’re not bringing in another player. We’re going to be status quo. It doesn’t change anything for Schwarber unless he comes in tomorrow and tells me he’s not feeling anything.”

Maton could get time in the outfield.

Stubbs hit a three-run homer off Reds reliever Reiver Sanmartin in the ninth. It was challenged for fan interference but the call was confirmed.

Sanmartin could not finish the ninth. Infielder Alejo Lopez made his first career mound appearance and got the final two outs, getting Hoskins to hit into a force play. Lopez pitched one inning at Single-A Dayton.