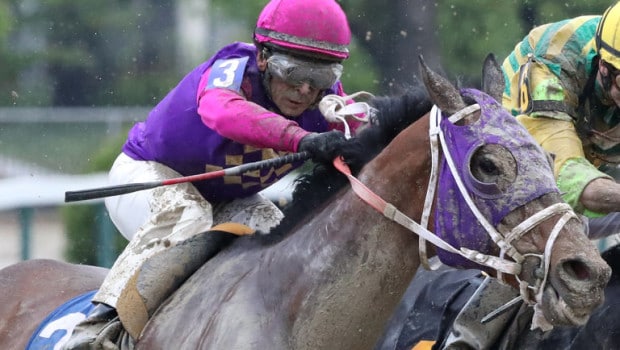 10 YEARS AFTER BARBARO’S DEATH, MORE TRAGEDY FOR HER OWNERS

There is more tragedy for the Philly-region owners of the star-crossed Barbaro.

Ten years after the Kentucky Derby winner Barbaro sustained an eventually fatal injury in the Preakness Stakes, two horses died during the race’s undercard at Pimlico Race Course yesterday, including a filly owned by Barbaro’s owners, Gretchen and Roy Jackson.

Pramedya broke from the No. 8 hole in the day’s fourth race, just as Barbaro did when he won the Kentucky Derby by six and a half lengths in 2006. She broke through the gate before the start, just as Barbaro did in the Preakness, and had to be reloaded. She then stumbled while coming around the turn, and the jockey Daniel Centeno was thrown to the turf.

Pimlico officials said Pramedya, a 4-year-old filly, was euthanized on the track after breaking her left front cannon bone. Centeno was driven off in an ambulance, and officials said his right collarbone was broken.

The race was won by Barbaro’s trainer, Michael Matz, with Truly Together.

Sal Sinatra, the Maryland Jockey Club president and general manager, said the turf course had been inspected and looked fine.

“It’s unfortunate, and then obviously, of course, with it being Barbaro’s connections, that makes it worse,” he said.

In the day’s first race, the 9-year-old gelding Homeboykris collapsed and died after finishing first and being photographed in the winner’s circle. Officials suspected a cardiovascular collapse, and he will be taken to the New Bolton Center in Pennsylvania for a necropsy. New Bolton, about 75 miles north of Baltimore, is where Barbaro had surgery on his right hind leg after stumbling at the start of the 2006 Preakness.