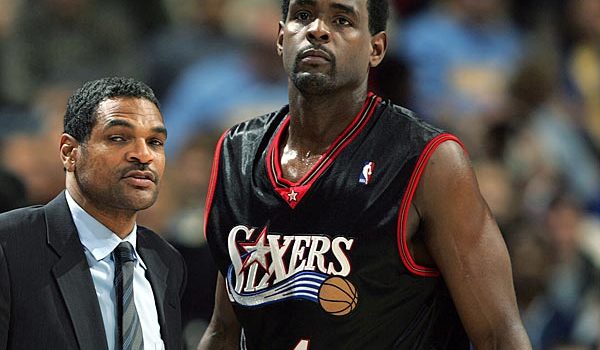 After many seasons in the weeds, pro sports are finally on the uptick, with the Phillies, Eagles, Sixers and Flyers showing signs of life.

But let us not forget these 10 losers, who made watching sports in this town so hard:

1 — Chris Webber, 76ers, F/C, 2005-07 (above) — Ex-GM Billy King set the 76ers back five years or more by trading for a washed up Webber, whose knees were shot, but King made the deal anyway. The whole thing blew up when Webber was paid 25 million in a buyout in January 2007. Even more astonishing, if that’s possible, is that Webber was paid a whopping $178 million plus during his 17 year NBA career, making him the possibly the most overpaid player in the history of a league known for overpaying underachievers like Webber.

2 — Freddy Garcia, Phillies, P, 2007 — In December 2006, the Phillies traded Gavin Floyd and Gio Gonzalez (two productive pitchers today) for Garcia. For a whopping $10 million salary, the Phils got 1-5 with an ERA of 5.90. He only pitched 58 innings that year, leaving the Phils the next season and total and utter failure. To make matters worse, he has won 35 games in the past five seasons for the White Sox and Yankees!

3 — Rex Hudler, Phillies, 2B, SS, OF, 1997-98.The self-proclaimed “Wonderdog” was paid 2.3 million for two seasons, a good contract back then. The Wonderdog batted .196 in 175 games played in Phillies pinstripes — making him a thief without a mask — ensuring his exalted position near the top of this dubious list.

4 — Mike Mamula, Eagles LB, 1995-2000 — The original “Workout Warrior”, Mamula improved his draft stock with a tremendous showing at the draft combine. The Eagles picked Mamula with the 7th overall pick, passing up the more heralded Warren Sapp, a DT who played 12 years and made seven Pro Bowls. Mamula also scored 49 out of 50 on the Wonderlick Test, unfortunately not helping him in any of his six unproductive NFL seasons.

5 — Kevin Allen, Eagles, T, 1985 — Taken in the 1st round in the 1985 draft, Allen may be the granddaddy bad pick of all-time. Off the field he was convicted of sexual assault and spent three years in prison, and soon after the NFL banned him for life. On the field ex- Eagles coach Buddy Ryan was asked his assessment of Allen and lamented, “He could be useful if you wanted someone to stand around and kill grass all day”. Easily the worst pick of all time.

6 — Antone Davis, Eagles, G, 1991-95— The Birds made Davis the 8th overall pick, moving up to get him in the 1991 NFL draft. Davis had six nondescript seasons, and is thought of as a bust. His closest claim to fame was appearing on the “Biggest Loser” TV show recently where he’s standing on a stage with his shirt off exposing a massive disgusting gut with the poundage in block letters showing 447! The Eagles can really pick them, can’t they?

7 — Von Hayes, Phillies, RF, 1B, 1983-91 — Played nine seasons for the Phils and had some decent years, but unfortunately will always be known as “five for one”, dubbed by Pete Rose. Hayes was traded for five players and never lived up to those lofty expectations.

8 — Andrew Lang, 76ers, C, 1992-93 — Lang was one of three players included in the Charles Barkley trade, and contributed virtually nothing on the court, averaging 5 points and 6 rebounds a game for the season. But Lang did have the unique ability to get an 84-year old sick man (my dad) to jump out of his chair and curse at the TV at what a terrible player he was watching. Way to go Dad! Lang vanished from Philadelphia after the season into oblivion.

9 — Lance Parrish, Phillies, C, 1987-88 — Signed as a free agent in 1987 after a stellar career with the Tigers. Never performed in Phillie pinstripes as advertised, batting .245 and .215 before moving on to the California Angels. Parrish hit 10 fewer homers per year in Philadelphia than his career average of 26.

10 — Jon Harris, Eagles, C, 1997 — 1997 1st round pick, Harris himself was stunned to learn he was a first rounder — another awful pick — he had two sacks in two years!Aagain the Eagles swayed away from conventional NFL wisdom and got burned.