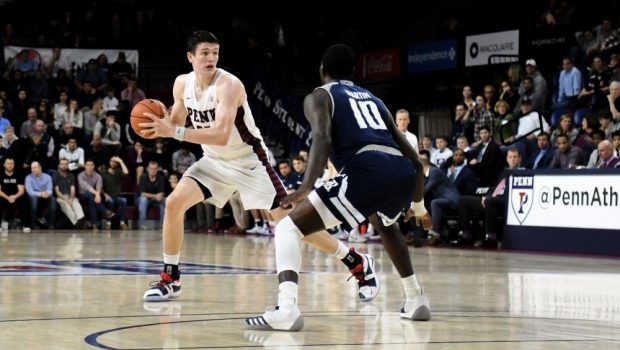 Penn stubbed it toe again yesterday at the Palestra.

Ray Salnave scored 17 points and Monmouth defeated Penn 76-74 in overtime to break a 14-game losing streak that stretched back to last season.

Penn and Monmouth, who played a four-overtime game last season, fought through 24 ties and 13 lead changes with the score knotted 72-72 in the final minute of OT before Salnave took over.

After a Penn turnover on a loose-ball scramble gave Monmouth (1-12) possession with 1:02 remaining in OT, Salnave worked the shot clock down to six before driving from the wing against AJ Brodeur (above), beat him to the post and scored on a pretty reverse scoop.

Brodeur scored on a drive on the other end to tie at 74 with 13.2 seconds remaining. He was fouled but the potential go-ahead free throw clanged off the front iron with Monmouth’s Diago Quinn grabbing the rebound.

Salnave drove down the right side of the paint and lofted a runner in traffic for the win. Penn (10-4) had 2.3 seconds to respond but Antonio Woods heave from just inside half court bounced off the back of the rim.

Quinn led the Hawks with 19 points and 14 boards. Brodeur scored 20 and Woods 19 for Penn.

Each team missed a potential winning shot as regulation ended at 67-67.