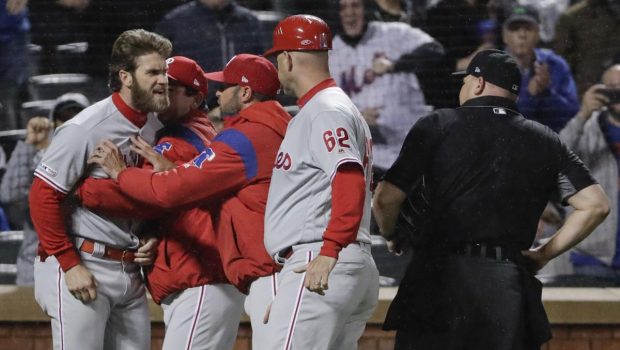 Bryce Harper Harper bolted from the bench, confronting the plate umpire after being ejected, and it took three Phillies to calm him down in a 5-1 loss to the New York Mets.

“I guess I overstepped,” he said later, softly and without expression.

The game started 1 1/2 hours late because of rain. But the wet weather certainly didn’t dampen emotions as Harper became the first Phillies player ejected since pitcher Justin De Fratus in 2015.

Harper struck out swinging his first time up, then was called out on strikes by Mark Carlson to begin the fourth. By then, it was obvious he wasn’t happy with Carlson’s zone.

Four batters later, Harper was in the dugout when he was tossed. Phillies manager Gabe Kapler quickly came out to argue, then Harper followed in a much bigger hurry.

“He made some comments in the dugout that were inappropriate that caused his ejection,” Carlson told a pool reporter, adding the language Harper used was “personal.”

Once he arrived on the scene, Harper screamed and waved his arms over and over from close range at Carlson, a 20-year umpire. Kapler kept trying to push away his star player from the ump.

Bench coach Rob Thomson soon wrapped up Harper and third base coach Dusty Wathan blocked his path to the plate. Kapler continued the argument as Harper made his way back to the bench and clubhouse.

Carlson said he thought there was physical contact during the dispute, saying, “It was from, in my opinion, Bryce bumping Gabe into me.”

Was it incidental or intentional?

“That decision will be made by Major League Baseball after watching the video,” crew chief Brian Gorman said.

Carlson said Harper was upset about a called strike in his first at-bat and mentioned it the next time he came up against Mets lefty Steven Matz.

“Normal chirping from the dugout,” he said. “I don’t know how he was selected.”

Arrieta and Kapler both said they thought there were some missed balls-and-strikes call. But Arrieta also called out his teammates.

“I don’t think our guys were ready to play,” Arrieta said.

As for Harper, “we need him out there,” the pitcher said. “I need him in right field and at the plate, and he wasn’t there.”

This was Harper’s 12th career ejection, according to retrosheet.org.

Matz (2-1) atoned for a dismal start last week in Philadelphia by pitching six fine innings while Jeff McNeil homered off Arrieta (3-2). The Phillies have lost four of five.

Matz allowed one run and three hits, and beat the Phillies for the first time in seven career starts.

“I didn’t put too much weight in that last start, to be honest,” Matz said. “It happens and I was confident that I was able to bounce back and that’s what I did.”

“It was just a good team win today, especially against a team like the Phillies. It was a good night,” he said.

Pete Alonso hit an RBI double in a two-run third and was hit by a pitch with the bases loaded in the seventh.

McNeil hit a solo home run in the fifth, ending a 133 at-bat string without one. Rhys Hoskins homered for the Phillies.