When the Eagles traded for the second overall pick in next week’s NFL Draft, it became all but certain that quarterbacks will be selected with the top two picks.

The big mystery is whether Cal’s Jared Goff or North Dakota State’s Carson Wentz will go No. 1 to the Los Angeles Rams and which of them winds up going to the Birds at No. 2.

The good news for the Eagles is they are guaranteed a shot at one of the draft’s top two passers. The bad news is no matter which quarterback that is, he will likely be significantly worse than the guy who got picked before him. 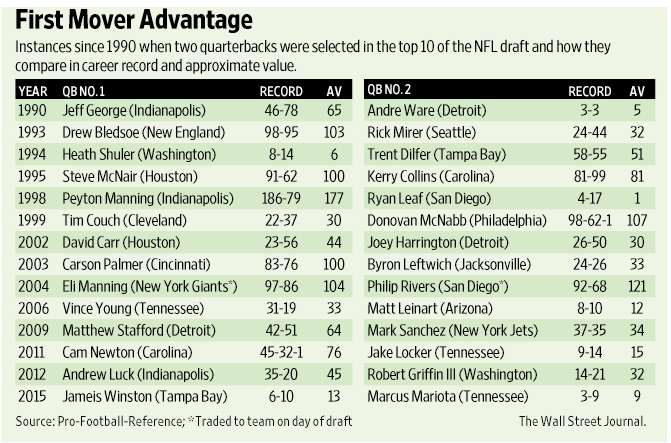 When given a straight choice between two highly rated passers, it turns out NFL teams are pretty good at figuring which of them is better. Since 1990, there have been 14 years in which at least two quarterbacks were selected in the first 10 picks, according to Pro-Football-Reference. On 11 of those occasions, the player picked first proved to be more effective.

Even on the rare occasions when the second quarterback outperformed the first, the results weren’t always cut and dried. Eli Manning and Philip Rivers were picked three spots apart in 2004 and subsequently switched teams in a draft-day trade. While Rivers holds an edge in our comparison by virtue of a higher career AV, Manning’s Giants have won two Super Bowls.

While it’s unlikely the Eagles will end up with a better quarterback than whoever goes to the Rams at No.1, it isn’t impossible. In fact, they’ve done it before. In 1999, after the Browns tabbed Tim Couch with the first overall selection, Philadelphia spent its second overall pick on Donovan McNabb, the franchise’s all-time leader in pass attempts, completions, passing yards and passing touchdowns.